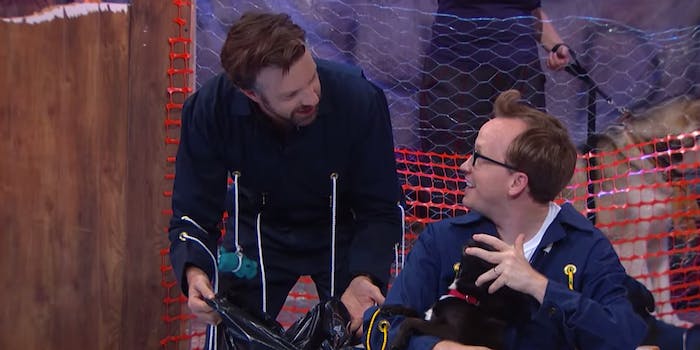 To quote Jamiroquai, this is virtual insanity.

The Chris Gethard Show is an incredible experiment in how a close-knit community can help a show evolve. And now, TCGS fans can get even closer to the experiment.

The variety show, which became a hit on NYC public access and made the jump to Fusion earlier this year, is venturing into the world of virtual reality. For the Aug. 6 episode, which features Silicon Valley star Kumail Nanjiani, Fusion pulled in L.A.-based entertainment company Surreal to present a VR version.

“Audience interaction and participation has been a hallmark of The Chris Gethard Show since its inception,” Fusion’s Chief Programming Officer Wade Beckett said in a statement. “We’re excited to partner with Surreal and enter uncharted territory of interactivity, allowing viewers to have an even deeper personal experience with Chris and the TCGS crew. It certainly won’t be boring—of this, we are certain.”

Viewers will also be able to see behind-the scenes extras, and while the episode is compatible with Google Cardboard and other VR headsets, if you don’t have one, you can still watch online.

Imagine: You could have virtually stood right next to Jason Sudeikis as he ate a chimichanga over a bag of poop.

Screengrab via The Chris Gethard Show/YouTube