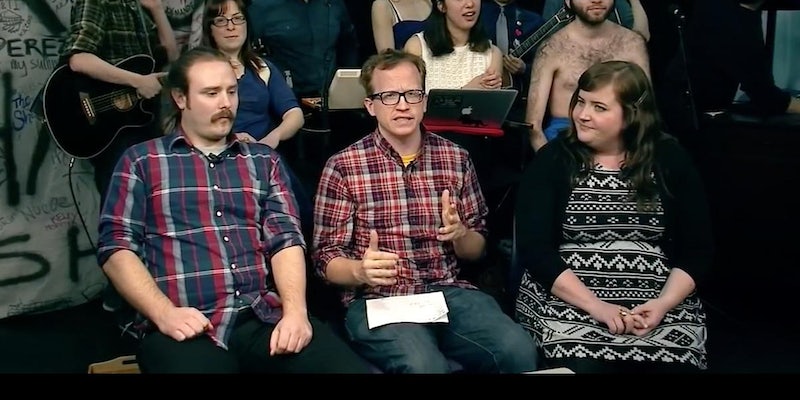 It gets really, really weird.

Now that the final king of late night, David Letterman, has signed off, there exists an empty void that can’t be filled by the safe, vanilla comedy of Jimmys Fallon and Kimmel, Seth Meyers, or James Corden. Maybe Stephen Colbert will be good, but maybe we’re just afraid to admit that he’s going to be a diluted version of himself, nowhere near as groundbreaking as his overbearing conservative alter-ego on Comedy Central. It’s desolate terrain out there on late-night TV, but there is a glimmer of hope, an oasis if you will, in the form of the no-holds-barred weirdness of The Chris Gethard Show, premiering tonight on Fusion.

OK, maybe it’s not exactly late-night TV since it airs at 10pm ET, but Gethard does promise to bring back some grit and wackiness to the variety talk show format.

TCGS began on New York City public access and ran for four years. Very much a passion project of Gethard’s, Fusion picked up the show in January and it’s retained much of its original format—including improvisational weirdness, celebrity (comedian) guests, topic-based phone calls from fans (during the livestream, which airs on Fusion’s website Tuesdays at 8pm ET), a DIY-stage full of homemade memorabilia, and Gethard’s onstage audience. In fact, when Fusion picked up the show in January, they insisted that they get the public access show.

“[Fusion] pulled us aside,” Gethard told Splitsider, “and said ‘We wanna be really clear: We know what we’re getting into, we want public access. Bring the public access to our network.”

Here’s a taste of TCGS during the public access years:

The Chris Gethard Show promises to bring an endless surge of mutants, weirdos, and laughs into your home. You’re definitely not going to get that from any of the Jimmys.