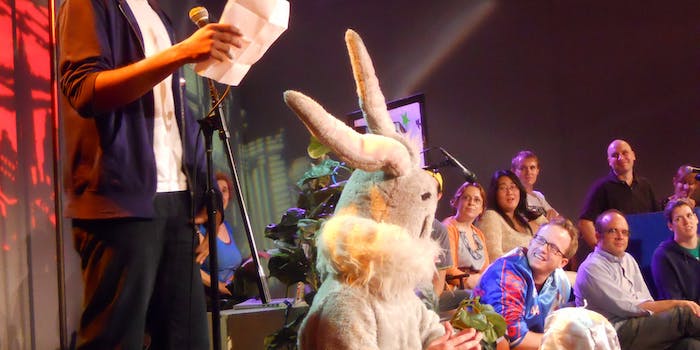 Get ready to enter the wonderful and weird world of GethHeads.

Cult hit The Chris Gethard Show is moving to the Fusion network next month, but it looks like the network will be showing ample love to Gethard and crew’s public access roots. On Thursday Fusion will air not one, but three best-loved episodes featuring comedy greats such as Amy Poehler, Zach Galifianakis, and Wyatt Cenac.

TONIGHT! #TCGS classic eps re-cut into hard hitting best of's air on @ThisIsFusion for the 1st time. We made it to cable. Don't miss it!

The Chris Gethard Show, often referred to as TCGS for short, started as a live show at the Upright Citizens Brigade Theatre in New York, and moved to public access network MNN in June 2011. The inventive take on the typical late-night format features a revolving cast of oddball characters, viewer call-ins, and whimsical concepts and challenges that color each episode with its own strange flavor. No two shows are exactly alike, but the universe is always familiar, inviting, and brimming with energy.

In “We Will Predict Your Future” Gethard welcomes Poehler who assists him in telling fortunes, and doling out life advice to callers and audience members. “Who Needs a Haircut” features Galifianakis, Gethard, and other members of the TCGS community giving and receiving live, on-air, haircuts with what can only be described as delightful results. And in “Zero Laughs” the cast is challenged to forgo laughing for the duration of the episode, while some very funny people do their best to force the laughter out of them.

Fusion’s decision to air episodes from the show’s public access years may be very welcome news to fans, who call themselves GethHeads, many of whom may be wondering what a post-public-access incarnation of the show might look like.