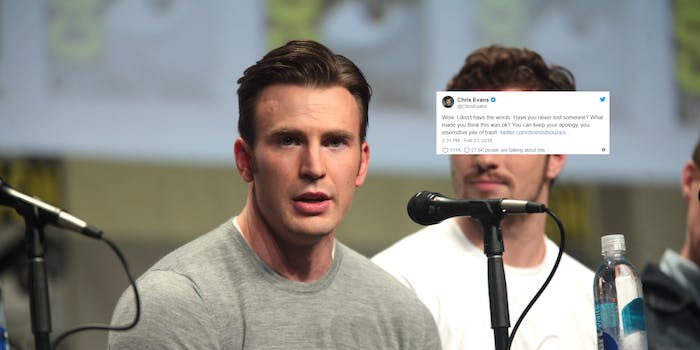 'Have you never lost someone?'

The Feb. 14 attack left 17 members of the school community dead, 14 more injured, and has ignited an unprecedented amount of social action around gun control in its wake. But it has also riled a base of conspiracy theorists and individuals willing to harass the survivors online. One such individual was right-wing commentator Dinesh D’Souza, who took to Twitter to laugh at the expense of the surviving children.

It started with a tweet from BuzzFeed News’ Jon Passantino, who shared an AP photo of some of the Parkland survivors Tuesday evening. The image shows students crying and embracing one another after hearing that Florida lawmakers voted down a bill that would have banned assault weapons in the state.

D’Souza embedded Passantino’s tweet into a tweet of his own, and added the caption, “Worst news since their parents told them to get summer jobs.”

Worst news since their parents told them to get summer jobs https://t.co/Vg3mXYvb4c

Evans saw the tweet, apparently, and was having none of it.

“Have you ever lost someone?” he asked. “What made you think this was ok? You can keep your apology, you insensitive pile of trash.”

Wow. I don’t have the words. Have you never lost someone? What made you think this was ok? You can keep your apology, you insensitive pile of trash. https://t.co/rmY0mNbZcV

According to the Huffington Post, getting burned by Captain America was only one of the ramifications D’Souza is facing. Many fellow conservatives have denounced his tweets, and the Fulshear Area Chamber of Commerce in Texas canceled an upcoming event he was scheduled to speak at. D’Souza was also denounced by the Conservative Political Action Conference, which removed him from the roster of speakers for the upcoming year and called his comments “indefensible.”