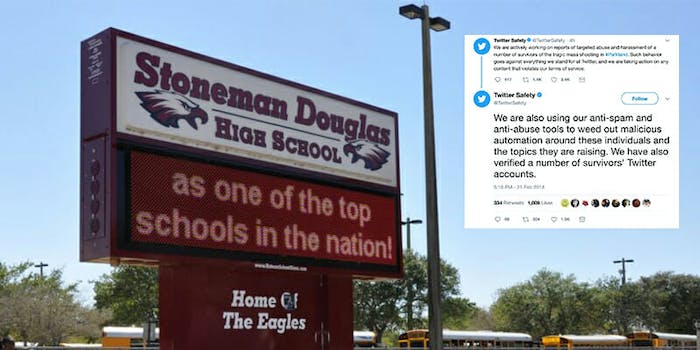 'Such behavior goes against everything we stand for at Twitter.'

Following the deadly attack, many of the surviving students of Marjory Stoneman Douglas High School have been outspoken via Twitter and other social media, calling for gun control measures and criticizing right-wing responses to the shooting. In return, the students have faced online harassment, abuse, and conspiracy theories.

We are also using our anti-spam and anti-abuse tools to weed out malicious automation around these individuals and the topics they are raising. We have also verified a number of survivors' Twitter accounts.

The social media giant added that it’s using anti-spam tools to “weed out malicious automation around these individuals and the topics they are raising,” such as calls for gun control. Some survivors’ Twitter accounts have also been verified to help combat harassment.

One of the students who has been most vocal after the attack, David Hogg, has been accused of being an FBI plant, a crisis actor, and most recently a felon. Conservatives have pushed the theories via Reddit and YouTube.

Twitter’s announcement regarding Parkland survivors came hours after the social media company purged bot accounts and tightened its rules to crack down on fake accounts.