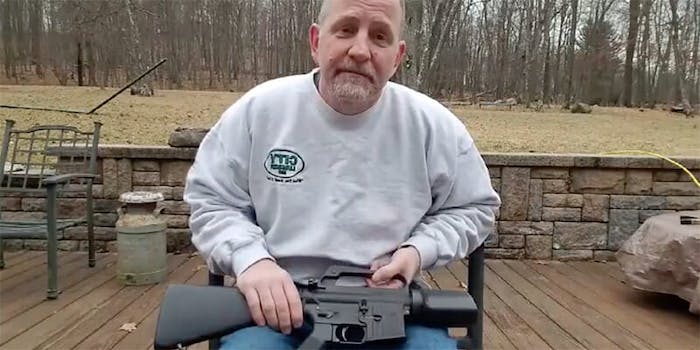 'Is the right to own this weapon more important than someone's life?'

Legal U.S. gun owners are destroying their rifles and handguns in the wake of the mass shooting that killed 17 people in Parkland, Florida—and they’re posting videos to prove it.

Scott Pappalardo appears to have started the trend with a six-minute video to his Facebook page on Saturday that quickly went viral, Business Insider reported Tuesday. In the clip, he’s seen with an AR-15 semiautomatic rifle, the same weapon allegedly used by gunman Nikolas Cruz in the shooting at Marjory Douglas High School on Wednesday.

In the video, Pappalardo explains that he’s a “firm believer in the Second Amendment” and that it’s “fun to shoot” with the AR-15 he bought 30 years ago, though he says he’s not a hunter and has never killed anything with the weapon. But following the Parkland shooting, Pappalardo says he never wants the gun to be used to commit “a horrific act.”

“So, I’ve decided today, I’m going to make sure this weapon will never be able to take a life,” he says. “The barrel of this gun will never be pointed at someone. I mean think about it: Is the right to own this weapon more important than someone’s life?”

He then cuts up the rifle with what appears to be an electric saw.

“This isn’t the answer to solve all the problems,” Pappalardo says in the video. “No one thing is going to change it. And there will always be people who want to kill and will do it, one way or another. But they’re not going to do it with this gun. And I’m hoping maybe someone will see [this video] and say, maybe I’ll do the same thing.”

In the caption of his video, Pappalardo wrote, “My drop in a very large bucket” and included #OneLess, meaning one fewer gun. The video had more than 20 million views by Tuesday evening.

For years I have felt pretty helpless in the face of the gun violence issue. What can I do? I study, but adults don't…