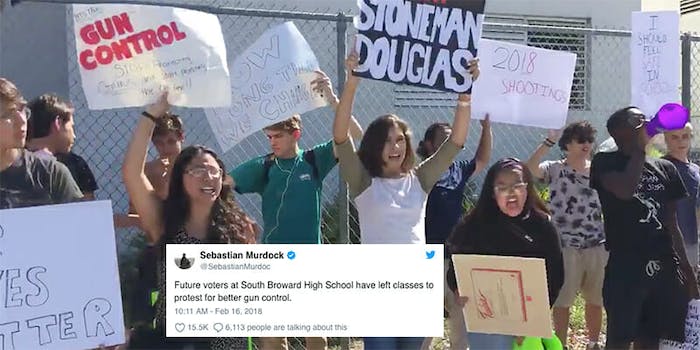 Two days after a gunman killed 17 people with an assault-style rifle at Marjory Stoneman Douglas High School, students at a nearby high school gathered to protest gun violence. Meanwhile, organizers are preparing for a national school walkout for gun reform next month.

Students at South Broward High School protested Friday morning to demand from lawmakers “extensive background checks,”  “elimination of the gun show loophole,” and to “stop lobbying from the NRA,” according to a flyer passed out at the school.

PROTEST FOR GUN CONTROL TOMORROW @ 8 AM. Stand up for those who no longer have a voice. It could’ve been your friends, your teachers, it could’ve been you. Outside SOUTH BROWARD HIGH & US1. pic.twitter.com/HdKhkq2CbL

Dozens of students, many of whom are too young to vote, reportedly gathered with signs—and police protection.

The Huffington Post reported that 16-year-old Sara Rodriguez said she participated in the protest because she wants to “end gun violence.” She also called out lawmakers for failing to pass gun reform.

“They don’t pay attention to our voice and we’re really tired of staying silent,” she told the Post. “We are the future. We’re trying to make it but we can’t do it if they’re not listening.”

Women’s March Youth Empower, an initiative by the people who organized the Women’s March, is also calling for gun reform. The organization is leading a national school walkout for the cause on March 14, 2018, with an invitation for students, parents, teachers, and allies to participate for 17 minutes at 10am across every time zone.

The walkout, called “Enough,” has a Facebook event page. By Friday evening, more than 17,000 people had indicated they plan to participate in the event.

The students’ and organizations’ efforts to protest gun violence reflect a national conversation taking place in the days after the deadly mass shooting in Parkland. #GunReform went viral in the days following the attack, and politicians and celebrities alike have demanded that lawmakers end the stonewall on gun control legislation.

Correction 11:55am CT, Feb. 18: This article has been adjusted to reflect the correct date of the Women’s March Youth Empower walkout. That event is slated for March 14, not March 17.