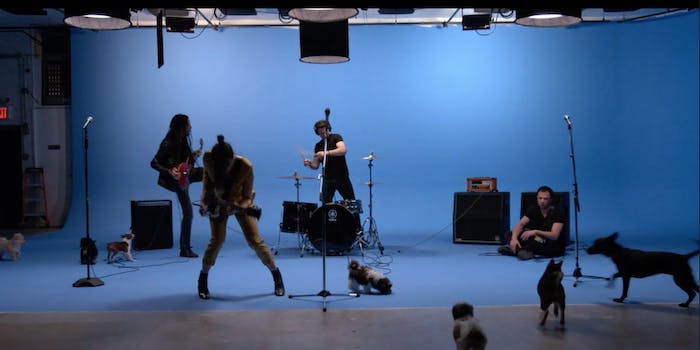 Musician Charlene Kaye homages a Weezer classic with her new video for “Honey,” the debut single from her upcoming EP.

“Weezer was the soundtrack to the majority of my and (my sister) Liann’s awkward teenagedom,” Kaye, who also plays in San Fermin, wrote the Daily Dot via email. “Liann had a hand-drawn portrait of Rivers Cuomo in one of her school binders, a lightning bolt guitar strap like he had, and Weezer posters all over her room.”

Kaye’s sister, Liann, served as director on the project, a shot-by-shot take of the video for “Undone – the Sweater Song,” in which Weezer famously rejected all sweater-related treatments for and simply shot on a puppy-filled set with Spike Jonze. For their remake, Liann assigned each member in Charlene’s band a Weezer alter ego, and had them study their counterpart to portray them in the “Honey” video.

The only big snag? The dogs.

“We’d asked a bunch of friends if we could borrow their dogs, but didn’t have a lot of luck,” said Liann. “Luckily, my roommate alerted me to this service in the city called ‘Puppy Party’ where you can rent a bunch of puppies for corporate events or private parties. It was the best day ever when they arrived on set. … We only had to do about 8 takes, but at the end of each one, the puppies would be all over the place and we had to yell to the cast and crew ‘EVERYONE GRAB A PUPPY!!’ Then we’d start over.”

You can stream the individual “Honey” video, and compare it to the Weezer version, below.

It sounds like this was just an excuse for a set full of puppies—who wouldn’t watch that?