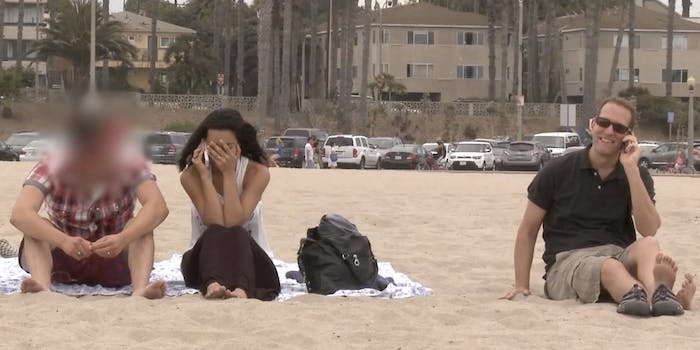 Sand, surf, and some creepy dude eavesdropping on your phone call.

Loud cellphone talkers are everywhere you go, and YouTuber Greg Benson, the man behing Medicore Films, has a funny way of getting some revenge. His tactic? Just start loudly butting in on their conversations while on your own phone nearby.

Benson has pulled this prank successfully since 2011. He’ll stop beside a loud cellphone user and begin responding to their conversation as if he’s the person on the other end of the phone. Eventually the subject catch on, to hilarious results. He’s cellphone crashed at airports, parks and even Disneyland. His latest video targets beachgoers and their public conversations.

Our favorite moment of the beach video is when the person on the other end of the line of one of his unwitting subjects knows all about cellphone crashing and gets excited to to talk to Benson. “I wish I could shake your hand,” she exclaims. All-in-all, most of his subjects are exceedingly good sports.