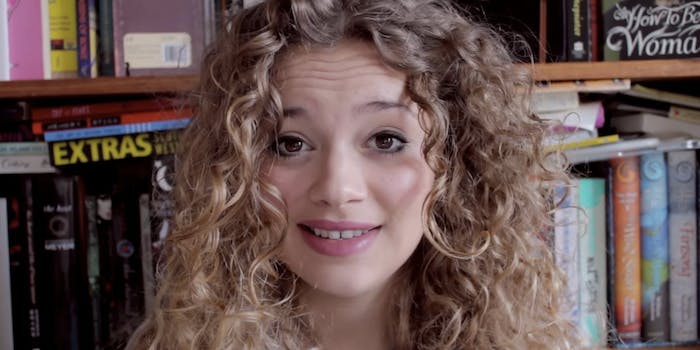 We have a crush on YouTube’s Carrie Hope Fletcher

When I think of Carrie Hope Fletcher, I think of three things: her incredible singing voice; her ever-relatable vlogs about relationships, Disney, tea, pep talks, life’s big and small moments; and her overflowing bookshelf that will one day collapse the floor of her bedroom.

Since starting her channel It’s Way Past My Bedtime in 2011, Fletcher has established herself, and her gorgeous mane of curly blond hair (it’s full of secrets!), as a role model and friend to her nearly 600,000 subscribers—or Hopefuls, as she likes to call them.

Can you tell I’m one of them? No? Keep reading.

Her channel is a mixed bag of content, including covers of popular songs, book reviews, vlogs following her crazy life, and video letters between herself and her brother, Tom Fletcher of McBusted. While it’s clear Fletcher loves making YouTube videos, her daily life is a juggling act of countless other full-time jobs. She performs eight shows a week as Eponine in Les Miserables on London’s West End, and recently, she just finished writing her first novel, All I Know Now, which will be released on April 23.

When sitting down to watch Fletcher’s videos, viewers are instantly taken by her genuine enthusiasm for the big and little moments of life. But unlike many other vloggers who present only the “picture-perfect” moments, Fletcher isn’t afraid to talk about both sides of the coin. In an interview with Ben Cook, she candidly shared her struggles with bipolar disorder and being “YouTube famous.” Last year, after allegations surfaced that Fletcher’s then-boyfriend Alex Day had sexually assaulted numerous fans, Fletcher kept her chin up and took the high road, addressing that the two had separated, and later on, she used YouTube to talk about the importance of a healthy relationship.

Fletcher has said publicly that she will not swear in front of her fans because she considers herself, and all individuals who chose to make content on YouTube, role models for their audiences. And just like her fans, Fletcher is continuing to evolve as a person—embracing new projects (she must have a time-turner, right?) and to our delight, taking us along for the ride!

While we may not be a professional Broadway performers or a published author, we can live vicariously through Fletcher’s adventures, and even I’ll admit, sometimes that’s pretty amazing.