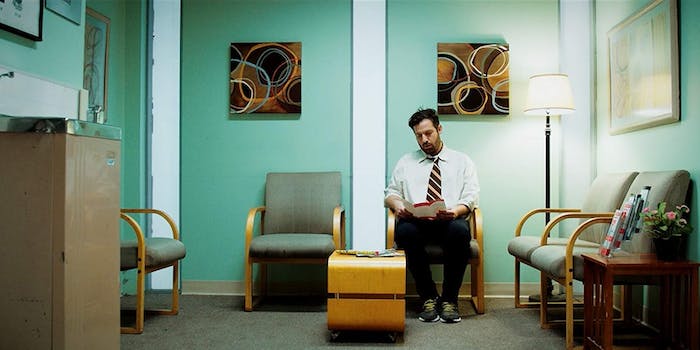 Horror comedy ‘Butt Boy’ is even wilder than its title suggests

You have to wonder how the hell Butt Boy ever got funded. Not because it’s bad, but because, well… how do you even pitch it? First off, Butt Boy is not (or at least mostly not) a sex movie. However, it does manage to be even wilder than its attention-grabbing title suggests: a genre-defying fantasy/horror/comedy that doubles as a parody of overwrought crime dramas. Director/co-writer Tyler Cornack stars as Chip Gutchell, a schlubby suburban dad whose life changes after his first prostate exam. As you can probably guess, he discovers the magic of sticking things up his butt—but in this case, it’s literal magic, because his anus is a wormhole to another dimension.

It’s hard to judge a movie like this using a traditional star-rating. I certainly enjoyed watching it with a crowd of horror fans at Frightfest, my main criticism being that 100 minutes felt a smidge too long for a film about a wormhole butt. But if this wacky, R-rated premise appeals to you, then I recommend getting some pals together and watching it without reading any further, because part of the joy was discovering in real-time what Butt Boy is actually about. Yes, the wormhole anus is just the beginning.

Butt Boy doesn’t waste any time introducing its central conceit. Within the first couple of minutes, Chip Gutchell is hungrily cramming household objects up his ass—portrayed in a surprisingly tasteful manner, without letting us see the actual act take place. The camera just focuses on a bar of soap, or a TV remote, or (dear god!) the family dog, and the next thing we know… it’s gone. Vanished into the butt dimension.

This is clearly becoming an addictive compulsion for Chip, culminating in him kidnapping a baby from a nearby park, which prompts a neighborhood manhunt. Hitting rock bottom, he attempts suicide. Then, we’re hit with an ambitious subtitle that sent me into a tailspin of mild hysteria: Nine years later. Chip’s anal origin story was just the pre-credits intro to a crime drama co-starring detective Russell Fox (Tyler Rice), a recovering alcoholic. He winds up with Chip as his sponsor at Alcoholics Anonymous, kickstarting a comical game of cat-and-mouse where Russell is the Clarice to Chip’s Hannibal Lecter. Chip, as you can probably guess, does not have a drinking problem. He has a butt wormhole addiction, and he’s about to fall off the wagon.

Poking fun at cop movies where loner detectives go up against uniquely bizarre criminal masterminds, Butt Boy portrays Chip as a downbeat office drone whose addiction turns him into a monster. Russell is the only person who sees through the facade, played completely straight as a hardboiled cop antihero with a dark past.

The fact that Butt Boy’s creators took this so seriously is crucial to the film’s success. Tyler Cornack and his co-writer Ryan Koch also wrote the music, giving us a thrumming techno soundtrack to go with the colorful, stylized aesthetic. The whole thing is just a gross-out joke stretched to absurd proportions, seemingly designed to attract epithets like “weirdest film of the year.” But you know what? It works.

Butt Boy comes out in the U.S. on April 3, arriving online on April 14.