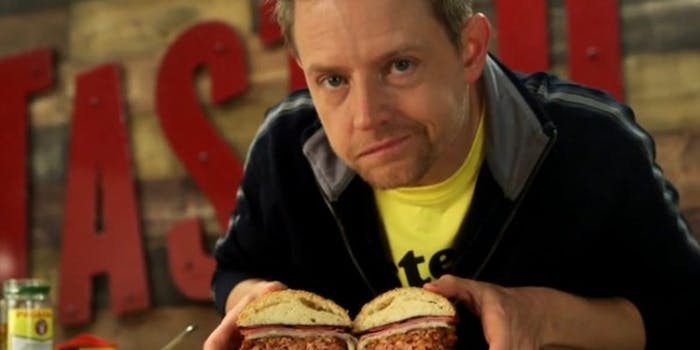 For season 2 of his popular YouTube show, host Richard Blais is turning up the sound effects.

“Some commenters have suggested we tone it down a little,” explains host Richard Blais in the first episode of the second season of Burger Lab, “take it easy on the sound effects, maybe go less epic with the music, not make it feel like every time we flip a burger that the universe is coming to an end. We thought long and hard about it, and the answer is NO.”

This  introduction sets a perfect stage not just for Burger Lab, but for the entire landscape of online cooking shows. Ever since Epic Meal Time‘s creators rose from “a bunch of dudes screwing around in the kitchen” to “drunk bacon YouTube gods”, every show is trying to do cooking with a drunker, fattier, messier, or just plain bigger twist, and no series exemplifies that trend better than Burger Lab.

The first episode of season two, which is available on the Tasted channel, has Blais, a former Top Chef All-Stars winner, cooking up what he calls a “Spicy Po’ Boy Muffaletta Burger”. Boiled down to its essence, the episode is just showing viewers how to make good Cajun/Creole food. But Burger Lab also throws in an excessive amount of meat and carbs. Why? It’s epic, that’s why.

The new cooking show trend is reminiscent of the current tone in many popular horror movies, where a certain amount of camp and cheese is encouraged because it makes the movie that much more fun. Burger Lab (and the many shows like it) are definitely over-the-top, but the Epic Meal Time effect is a positive one. After all, if I want a show about the fine details of culinary excellence, I can turn on the TV. On the Internet, anything goes.