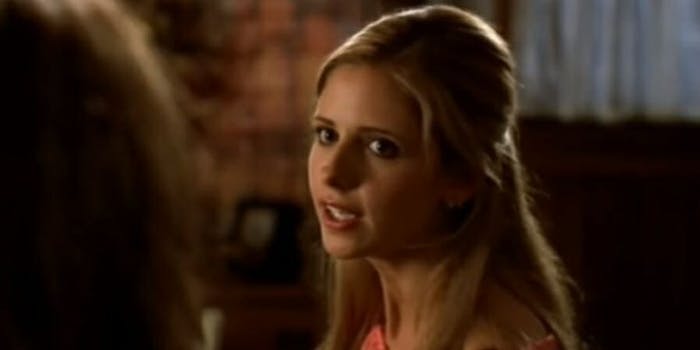 Twitter is not excited for a ‘Buffy the Vampire Slayer’ reboot

Someone needs to take Mr. Pointy to this idea.

It was announced late last week that 20th Century Fox is in the process of developing a reboot of Buffy the Vampire Slayer, just over 15 years after the original series ended.

Right now, details are murky at best other than the fact that producers—including executive producer Joss Whedon, who was a showrunner on the original series—are reportedly looking to cast a Black actress in the lead role and that the reboot is planned to be a contemporary and diverse take on the original series which will reflect on our current political and cultural climate.

“Like our world, it will be richly diverse, and like the original, some aspects of the series could be seen as metaphors for issues facing us all today,” said producers in a statement.

Naturally, whenever a reboot of a beloved pop culture mainstay with a cult following is announced, fans tend to react in a cool, calm, and collected manner. Oh wait, I actually meant to say the exact opposite of that. People would have likely been happier with a revival that focused on a new slayer, but one that possibly still involved original series lead Sarah Michelle Gellar and some of the other cast and would derive from the same canon.

From the sounds of it, however, that does not appear to be the direction Whedon and crew plan to take, and fans were quick to voice their displeasure on Twitter.

raise your hand if you think this Buffy reboot will be a total flop and can go to hell pic.twitter.com/XPE91wuc0S

Please don't reboot Buffy. What's the point? It's lazy. Why not continue the universe's story? There's so much to build up off from. People who like Buffy won't want to watch a reboot, and people who didnt like it to begin with won't bother. Genuinely upset.

No man can replace this. pic.twitter.com/EE2DOrHGdo

I loved Buffy. But you know what else I love? When Hollywood looks at new stories by people of color instead of rebooting old ones and changing the casting.

I do not care for a Buffy the Vampire Slayer reboot unless it's about another Slayer!
The original series was perfect, they don't need to re do it!!!!
Can we get over this reboot era, I'm BORED of it!

We already had it and it was great

Why not make something new

We're running out of boots

A. Buffy sucked after season 5. B. Seasons 1-5 were deeply flawed. C. The best eps came from Marti Noxon & Tim Minear. D. Whedon's rapey bullshit was trash then & now. E. Whedon's passive racism is trash forever. This remake idea sucks. Thanks for coming to my Ted talk.

But perhaps no take was as savage as this one with a screenshot from “The Body” episode:

Me thinking about the #Buffy reboot pic.twitter.com/3HjXKsBQhi

With no script in place yet, it’s not too late for Whedon and company to change course. But one way or another, Fox 21 TV Studios will be pitching the series to streaming and cable outlets later this summer, so a reboot, no matter what Buffy fans want, is likely imminent.