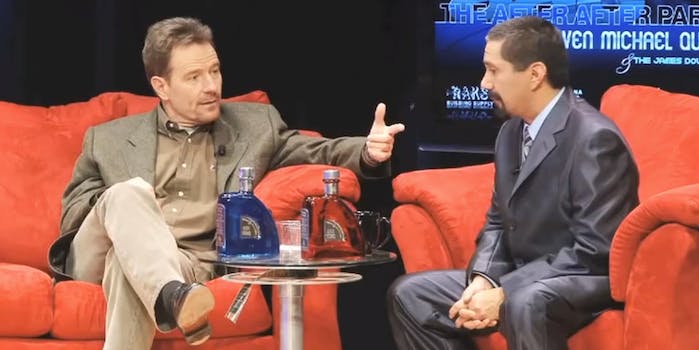 He can become Heisenberg so fast, it's scary.

Gomez may have more on his hands than he originally bargained for.

In 2011, Bryan Cranston stopped by Breaking Bad costar Steven Michael Quezada’s talk show The After After Party for an interview. He had grown his hair back from Walter White’s now iconic shaved head so that he was able to do other work as an actor during the show’s hiatus, but that didn’t stop Cranston from transforming into Heisenberg at a moment’s notice.

“I have a whole team of professionals with me that when I go to work, I mean, the transition happens and I instantly become Walter White,” Cranston explained to Quezada. “Wanna see it?”

With his team of professionals at his call, Cranston took a normally 45-minute process and crammed it into just a few minutes’ time. He even shaved his head in front of an audience. He proved that he is the one who transforms, which freaked out Quezada a little bit.

The two-and-a-half year old video went viral on Reddit as fans impatiently wait for the next Breaking Bad episode. It’s just the latest in a series of behind-the-scenes clips (and just about anything the actors did before Breaking Bad) to resurface on the Internet.