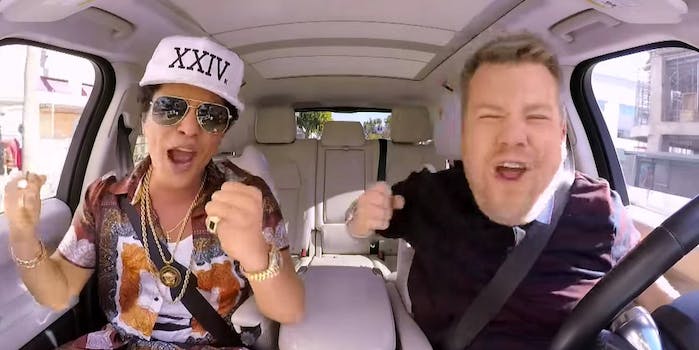 Get in the shoulder zone.

What’s better than jamming out to Bruno Mars while on your morning commute? Jamming out with Bruno Mars and harmonizing on his songs like best friends.

On the latest edition of Carpool Karaoke for the Late Late Show with James Corden, Corden and Mars drive through the streets of sunny, traffic-clogged Los Angeles while singing Mars hits such as “24K Magic” and Mark Ronson‘s “Uptown Funk.”

In asking about Mars’ life, Corden learns that the musician really can pull off any damn hat he pleases and that he at one point paid rent by playing cards.

After a rousing lesson of shoulder-specific dance moves, the two discuss just how sexual Mars’ moves are, and poor Corden admits that he can’t really keep up.

“All that song teaches me is that you and I are very different in the bedroom,” Corden says after a rendition of “Versace on the Floor.” “If I start bringing out those sorts of shoulder moves I think I’d be living on my own with a roommate, above a gas station.”