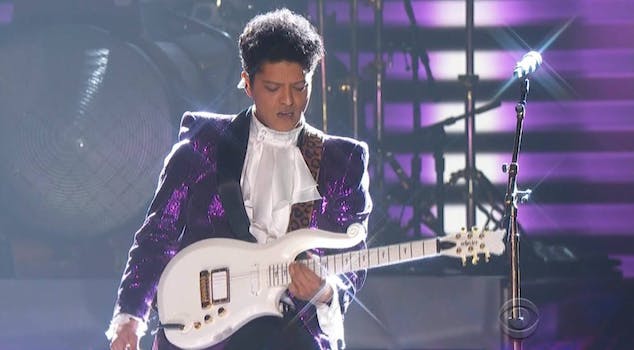 Morris Day’s soul-funk band the Time started off the tribute, singing their own “Jungle Love,” and followed it with Prince’s “The Bird.” Members in the audience, including Snoop Dogg, Beyoncé, and Jay Z, joined in on the dance that “Jungle Love” inspired.

The Time were ideal candidates to cover Prince–they worked closely with him throughout the 1980s, and Prince wrote and produced the Time’s early albums, including The Time, What Time Is It?, and Ice Cream Castle. Members of the Time also appeared in the 1984 movie Purple Rain.

Mars, however, stole the show with his rousing performance of “Let’s Go Crazy,” clearly channeling his inner Prince while decked out in a purple sequin suit. Most notable were his guitar solos throughout the song.

When @BrunoMars kills it not once, but twice at the #Grammys OKAAAAY BRUNO! I see you! #PRINCE pic.twitter.com/fIZTjCu0Pt

The Grammys were filled with many other memorable performances, including Beyoncé’s stunning ode to motherhood and A Tribe Called Quest’s rage against “President Agent Orange.”