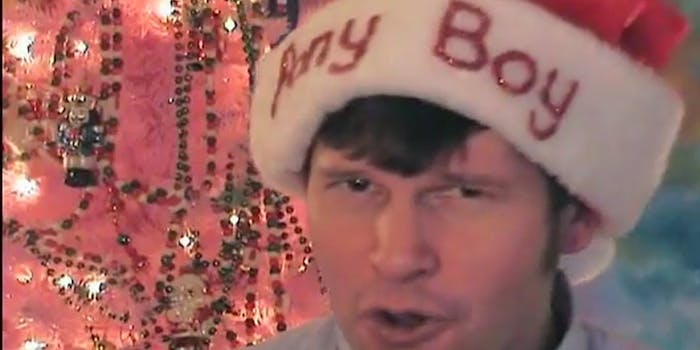 Season’s greetings from Brian Atene, a fringe icon of YouTube

After first achieving accidental YouTube fame for his Full Metal Jacket audition tape, Brian Atene returned to the site for a series of holiday messages. Watch them while you still can.

Back in 2006 Atene’s “Good Day, Mister Kubrick,” an audition tape for a part in Full Metal Jacket from 1984, was resurrected from some dusty vault, posted to YouTube without his knowledge, and went viral in the biggest way. BoingBoing, Laughing Squid, and every other major outlet raved over this 4 minutes and 25 seconds of raving lunacy—a monologue torn from the pages of SE Hinton’s The Outsiders.

Instead of attempting to sum up this absurdist masterpiece, take a look for yourself.

Originally using the YouTube username “Juilliard Dropout,” he was alternately encouraged and horrified by the feedback from viewers, as explained in a series of YouTube messages.

Actors can be dramatic, of course, and when the feedback got too noisy for him,  Atene would delete the videos, much to the chagrin of his loyal fans. Eventually he deleted the entire account, and that, we thought, was that.

But Atene springs eternal, and he quietly returned to YouTube in 2008. The videos caught the attention of Tosh.0, where he did a guest segment and then a blink-and-you’ll-miss-it role on “Cougar Town,” playing a creepy photographer.

Since Atene’s stealthy return to the interwebs, the videos have been up and down at his whim, but for this holiday season a few of the old favorites have been uploaded to his new account, BrianAtene101.

Here then is the Daily Dot’s holiday roundup from the legendary Brian Atene.

This is my favorite Christmas video of all time, although I couldn’t really tell you why. It’s based on the war-like militant in Planet of the Apes.

In this clip he adeptly satirizes his 20-year-old self (and Kevin Spacey) while filling in the spaces between 1984’s audition tape and the current day. Then he performs a selection from “Herbie Goes to Monte Carlo” for no reason that I can ascertain.