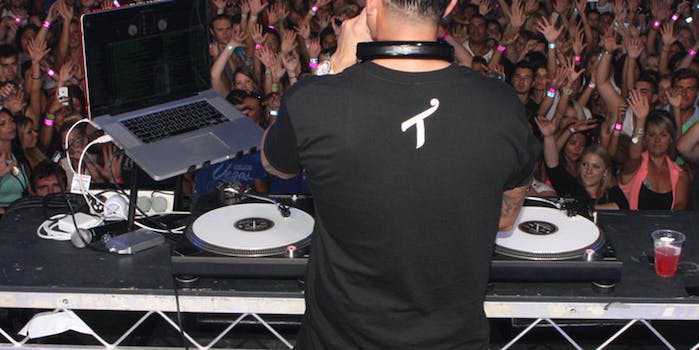 Surprisingly, DJs actually want to be on this list.

One of the most divisive topics in electronic dance music is DJ Magazine’s annual Top 100 DJs list. Introduced in the late ‘90s and at one time considered a serious accolade, the list is now widely derided as a popularity contest, since it’s based on a reader poll, and many DJs go to some pretty extreme lengths to campaign for votes. One French DJ this year even posted a photo of himself in blackface with the caption, “I’m a music’s slave [sic] & I love it – vote for me!”

Voting for the 2014 list opened a few weeks ago, with all the attendant hype that goes with it. There’s a good chance your favorite DJ’s Facebook page is going to look like this for awhile. So the recent arrival of a mysterious website called bottom100djs.com was greeted with no small amount of glee by the DJ Mag list’s many detractors.

The site is just a simple one-page form, similar to DJ Mag’s (minus the annoying registration process), spattered with garish, animated GIF “advertisements” for famously terrible DJs like Paris Hilton and Jersey Shore’s DJ Pauly D (again, very similar to DJ Mag, which does allow DJs to advertise on the actual voting form). Voters can submit up to five picks for their “bottom DJs.”

So who’s behind this prank, and will they actually post their poll’s results? A domain registration search revealed that bottom100djs.com is registered to a man in Sweden named Stefan Engblom. When reached via email, Engblom said only, “After talking to The Boss, I’ve been advised to say no comment.”

Stefan Engblom happens to be the same name as one-half of the Swedish electro-house duo Dada Life. Is it the same Stefan Engblom? Probably, especially since the duo are famous for staging elaborate pranks, including the Guinness-certified world’s largest pillow fight.

Many DJs hate the DJ Mag Top 100 list as much its critics, and already, some (including Dada Life) are jokingly campaigning for a spot on the Bottom 100:

I can’t resist. Gotta make this list! So…I hereby declare my candidacy for #bottom100DJs Vote for me! http://t.co/tiVVckKHSI @sxmelectro

ok citizens let’s get this going.. everyone please vote for us on the #bottom100DJs http://t.co/uOvK88hqdM ;)

Vote for me in the #Top100DJs or the #Bottom100DJs, either way if I end up on a list I will abide by your restraining order.

Of course, considering how many people hate the DJ Mag list and its perennial favorites (Armin Van Buuren, Tiesto, Avicii and David Guetta are nearly always in the top five), there’s a good chance that the Top 100 DJs and Bottom 100 DJs lists will be hard to tell apart.

Update: This story has been updated to reflect additional information about Stefan Engblom.