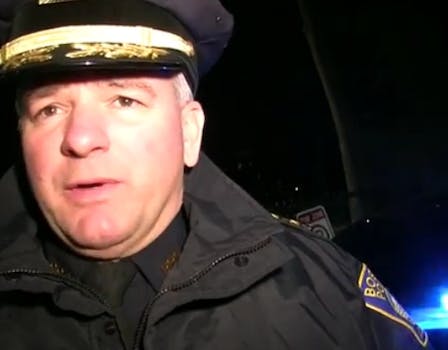 "Trolling the trolls," the Boston Police Department takes a bite out of crime, Dunkin Donuts, and Anonymous with a spoof video.

What do you do if your police department has been hacked by Anonymous?

You make a humorous video about it—after the site has been restored, of course.

For the second time in less than a year, the Boston Police Department (BPD) had its site hacked earlier this month. The most recent hack had the site down for six days and was once again a retaliation for what the hacktivist collective called “police brutality” against Occupy Boston protesters.

Elaine Driscoll, a BPD spokesman, told the Boston Globe the video was “not a response”  to Anonymous but a PR move to raise awareness for the website’s services:

“It made sense to take the opportunity to present our lighter side to the community, to show that we, too, have a sense of humor, which people aren’t often accustomed to from law enforcement.”

The two-minute video, uploaded onto YouTube on Feb. 9, features cops mocking themselves, talking about going into Dunkin Donuts and not being able to sleep since their site went down.

While Driscoll told the Boston Globe the video wasn’t directed at Anonymous, the Boston Police Department did use the same song Anonymous used when defacing the BPD site, KRS One’s “Sound of da Police.”.

While media outlets speculate on the impact of “trolling the trolls,” Anonymous so far doesn’t seem to mind the video response. One affiliated Anonymous account tweeted the video, writing “at least they have a sense of humor.”

“I think this was an effective and humorous way to﻿ respond to the hacking incident,” wrote garyjohnson53 on YouTube.