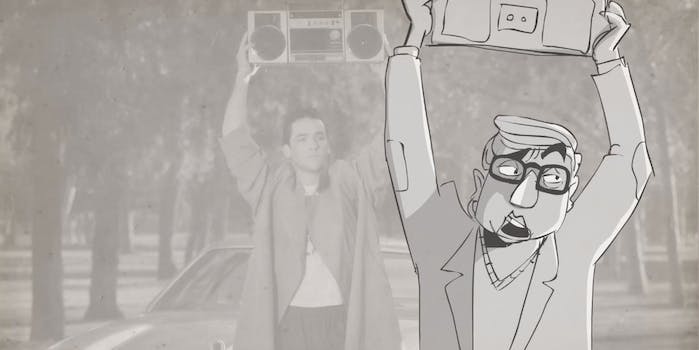 'I'm looking for films that come out of a director's quixotic, personal, passionate imagination.'

It’s been just over two years since the death of Roger Ebert, but as the latest animated interview from PBS Digital‘s Blank on Blank series proves, the legendary critic still has plenty of wisdom to share with the rest of us.

The source material for this episode comes from a 1990 interview Ebert gave to Lawrence Grobel, whose recordings also provided the Robin Williams episode of Blank on Blank, among others. In the interview, Ebert discusses what he looks for in a great film, shares his passion for the then-underrated Say Anything, and shares some less-than-conventional wisdom about the benefits of a good ego.

Here’s Ebert discussing what makes him most excited as a critic:

I’m looking for films that come out of a director’s quixotic, personal, passionate imagination, and not films that are manufactured to entertain large numbers of people efficiently—even though I am often among those entertained. I love to be entertained, I love those films, but the ones that really move me are the ones where a director felt that something had to be said and he said it.

As he’s done for other great artists in previous Blank on Blank interviews, animator Patrick Smith brings to life Ebert’s wry personality, as well as his earnestness. “Bad criticism… can be just as constructive or destructive as good,” he states. When Grobel asks Ebert who has the biggest ego in Hollywood, Ebert dodges what he thinks Grobel’s really asking—who’s the biggest asshole in the business—and instead explains that for a legendary filmmaker like Ingmar Bergman or Woody Allen, a healthy ego is part of a complete directorial vision. “I would want that to be seen as praise.”

Perhaps the most surprising aspect of the interview is the discussion of Ebert’s distaste for episodic television. “Life is too short to watch the same thing more than once,” he says, going on to describe a litany of superior social pleasures that underplay his own commitment to and love for the fans of such media.

You may talk like an egoist, but we were never fooled, Roger.