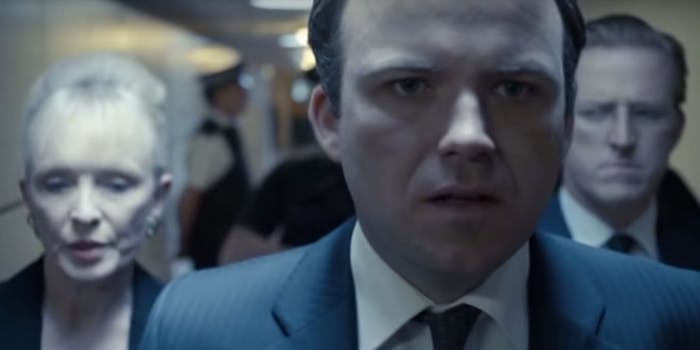 This is great promo for the new season.

Black Mirror, the Channel 4 anthology series created by Charlie Brooker, has offered fans several visions of the future: one where we might be able to play back memories via an implant, or bring a dead lover back to life via social media.

But last night, one episode came awfully close to a parallel reality.

A Daily Mail article started circulating Sunday evening, containing excerpts from a new book about Prime Minister David Cameron. One of the bullet points from the book: Cameron allegedly “put a private part of his anatomy” in a dead pig’s mouth while at university. Thus, #piggate captured Twitter’s imagination.

The first episode of Black Mirror, “The National Anthem,” revolves around a plotline in which online trolls blackmail the U.K. prime minister after a princess is kidnapped, forcing him to screw a pig on live TV. It’s a beautiful piece of satire, but once the Cameron story started circulating, more people started connecting the dots.

Brooker took to Twitter to assure people he could not have predicted this, but that episode also dissects how obsessed social media became with feeding into the pig-f**king event. And, well, if you were on Twitter last night, you know he got that part right.

Perhaps the least prescient line from the script. pic.twitter.com/xrXZ3tsaW3

Brooker did say there’s one episode of his show he’s worried about becoming reality.

The premise of season 2’s “White Bear”: A woman wakes up to a terrifying reality where people have become 24/7 voyeurs who stand by and film as violence happens around them, and the line between justice and torture has disappeared. Hmm…

For all its techno-thrilling, Black Mirror is bookended with political satire; its final episode, “The Waldo Moment,” is about a cartoon character who’s elevated to a serious political candidate by ratings-hungry media and the whims of the Internet. But Brooker couldn’t have predicted that, could he?

Back in 2013, when asked about the third season of Black Mirror, Brooker told Digital Spy that there’d been a delay:

That is the annoying thing about the slight delay. I have these ideas, and if I don’t get them out quickly, they could actually happen in the real world. That’s a worry. Real life will overtake the show.

How prescient. If anything, this is great promo for that new season, whenever it may arrive.