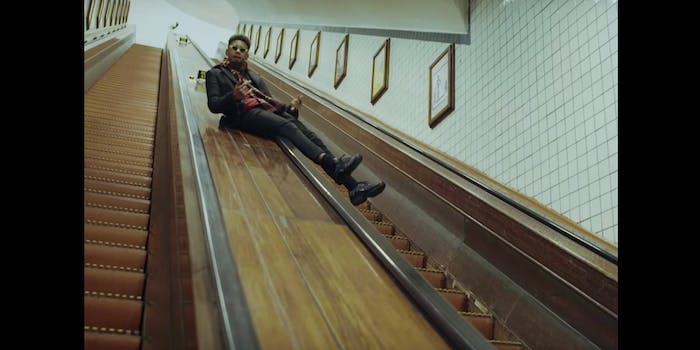 Teen Belgian rapper Yung Mavu has brought rap magic to Hogwarts in his trap-inspired version of the Harry Potter theme song. “Black Magic” features the iconic tune in the background as the young rapper spits seriously impressive bars about the life of Potter, and ins and outs of Hogwarts.

The video is an extended version of Mavu’s freestyle from June 2016, where he busted out sick lines while hanging out with friends. In just over a week, the remix has racked up more than 1.7 million views.

The song’s sharp lyrics feature familiar HP characters and monumental moments, with memorable lines like, “I’ve been sneaking ’round Hogwarts and they never caught me,” “Voldemort ain’t got shit on me, say ‘hail Gryffindor’ and ‘fuck Slytherin,'” and “Oh you think you savage? But I know better, got allowed to Hogwarts with a talking letter.”

The 16-year-old rapper’s Potter persona is complete with Gryffindor-inspired swag, a sassy wand, and circular glasses as he shows off killer dance moves.

And even for those not obsessed with the epic J.K. Rowling series, this can still serve as your New Year 2017 car jam to blast on the road.