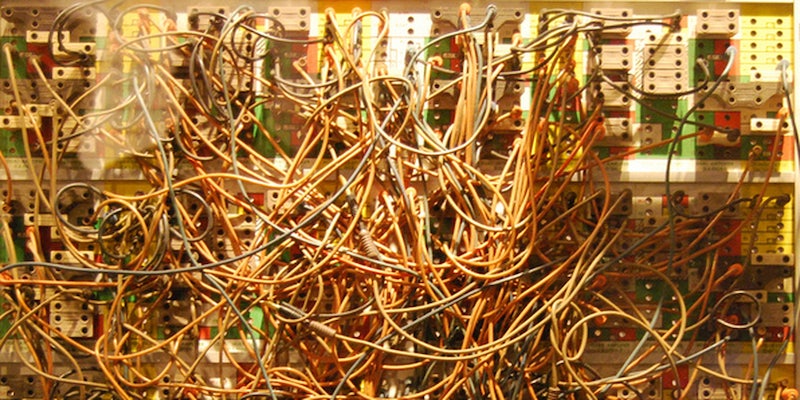 This guy’s cover band is better than yours because robots

The Bit-52s are the best all-automated band you've never heard of.

The Bit-52s are the best all-automated band you’ve never heard of. Almost half a million other people have, though, because the YouTube video of this Rube Goldberg contraption playing “Mock Lobster” has racked up 436,000 views and counting. Read on to meet the meat behind the music.

By day, James Cochrane is an ordinary-seeming Torontonian. By night, he’s bd594, a mad genius in the workshop, crafting musical delights on a mad scientist’s assortment of vintage computer parts assembled from garage sales, electronics stores, and trash heaps all over Hogtown. In a radio interview with Canada’s national broadcaster the CBC, he admitted to having set his rig on fire a few times. “The voltage doesn’t kill ya: it’s the current!” he said.

In the About section of each YouTube video (all recorded live) he outlines the components of each assemblage. The Bit-52’s, for example, are composed of:

The Daily Dot spoke with Cochrane via email to find out why a family man with a day job spends his nights putting together cover versions of pop hits on hardware that was current when Madonna was still on her first face.

Do you see yourself as a music hacker? Are you trained in music?

I do not see myself as a hacker rather a “repurposer” of any throw away old electronic stuff.  I have no musical training; however, I do play keyboards.  Always wanted to join a band but suffer from stage fright so I have built machines that play actual instruments.  Some day I may take them on the road.

When did you start making music on computer parts? Did someone inspire you?

I started back in 2009 and my main influences are

How do you put together your music?

This answer can go on for 100 pages so I will keep it short.

I like to use old computers such as the Amiga 600, Yamaha CX5M and other legacy computers to create music. I also build a lot of custom circuits which allows me to interface between different types of equipment. For example, I use sheet music or MIDI files to extract the notes from a song and use a microcontroller such as the PIC16F84A to execute the task. For example creating a PWM squarewave which generates a musical note in such things as a stepper motors. Stepper motors can be found in floppy drives, printers and scanners. Each device has a certain range of notes so I have to keep that in mind when putting together a song.

Of all your songs, which is your favorite, and why? Which took the longest? Have any musicians approached you about working together? I can totally see you working with They Might Be Giants.

My favorite song is EOL Robot Band covers The Beautiful People by Marilyn Manson,  and it took me 6 months to complete. [Note: that’s one month of work per 100,000 views, for those of you counting.]

This is my favorite video because I could never play a guitar or cello so I built a machine that could play for me.

Are you planning any tours?

I have been asked to visit to Chicago, New York, and Athens (Georgia) but my job prevents me from touring. Some of my videos have been used in trade shows, cable access channels and even the Belgium KORT film festival. Companies such as Epson and Audi have also expressed interested in working together but I could not find time to travel overseas.

Is there a song that you’d love to do but just haven’t managed to get it done the way you want? A “great white buffalo” if you will?

“Mad World” was really complicated. I could never get the cello to play long sustained notes. This is how I stumbled across one my songs “Beautiful People.”

[In the remarks on YouTube, Cochrane explains the process:

One night I was working on the Cello and the stepper motor started to jitter almost ripping the Cello string and Bow apart. As I was jumping over to the power switch I noticed that the jittery sound reminded me of a song. That song turned out to be The Beautiful People by Marilyn Manson. I programmed a small part for the Cello and it sounded great. Who would have ever though to use a Cello for that song? 2 months later…. my video was complete. So Enjoy. I may follow up with a another video showing what circuits, parts and tools that were used to make these robots.

Muting the guitar strings was a bitch but if you look at the solenoids on Fret 4 and 8 you will see that I covered the pads with foam and velvet. It is soft enough to stop the strings from vibrating.]

I am currently working on The B-52’s – “Private Idaho” with my robot band The Bit-52’s.  It will be another YouTube video for the Art Rocks Athens Event in Athens, Georgia (May 2014). I am also working on a top secret project. All I can tell you it is a song from the late 60s–early 70s.

What is your favorite piece of machinery to make music with, and why?

HP Scanjet 3C because it has the warmest sound and is great for vocal tracks.

How long have you been doing this? Have you made any money with it?

I have been doing this since 2009 on a bet that I could not make a viral video with over a million hits, and it is my goal to reach over 100 million views. Please note you may see advertising on some of my videos but I have not made one penny. YouTube has offered to pay me $200 which is a slap in the face when you consider I have accumulated over 10 million views. Maybe I need a manager.

With 10 million views, an international reputation, and offers from major brands, at the very least, he needs a good agent.