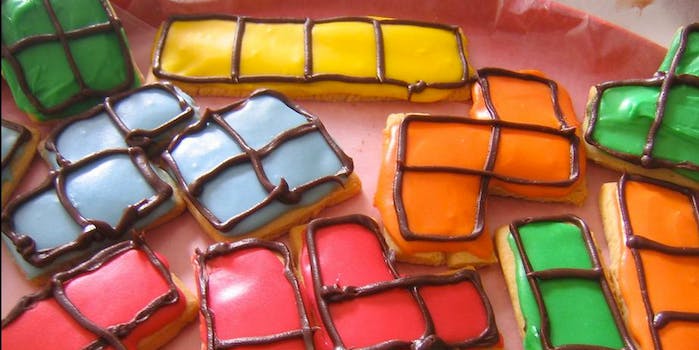 Here’s what the world’s largest Tetris game looks like

Tetris fans turned a Philadelphia skyscraper into a 29-story Tetris game this weekend.

Tetris turns 30 in June, and lovers of classic games are already starting to celebrate the famous geometrical challenge.

This Saturday, hundreds of Tetris fans gathered to play the classic block-arranging video game on a 100,000-square-foot screen. Using the glass lighting system of Philadelphia’s 29-story Cira Centre, gamers gathered to compete using joysticks that transmitted data using 4G. Their movements were projected onto two sides of the building. The game kicked off Philadelphia Tech Week, and it has likely broken a record for the world’s largest Tetris game, as well as the world’s largest gaming surface.

Frank Lee, an associate professor of digital media at Drexel University, oversaw the project. Lee already holds the Guinness world record for the largest architectural game for projecting Pong onto the same skyscraper, so he’s a seasoned pro in the extremely niche field of Making Video Games Gigantic.

This isn’t the first time people played Tetris on the side of a building. In 2012, hackers projected a game onto MIT’s Green Building. But this time around, the facade was a skyscraper, and the dimensions were much larger.

Lee may be hard-pressed to top himself after successfully creating the world’s largest video game. Maybe we’ll see Super Mario projected on the moon in a few years’ time.