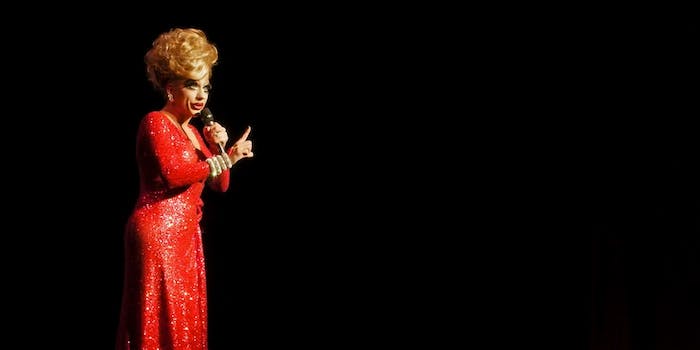 If you’re a fan of RuPaul’s Drag Race, you likely know Bianca Del Rio, winner of season 6. If you’re not, Del Rio’s new comedy special, Rolodex of Hate, is your crash course.

The special is Vimeo’s first dive into comedy specials, a genre streaming competitor Netflix has been especially successful growing in the past year. In a statement, Sam Toles, Vimeo’s head of global content acquisitions and distribution, said Vimeo zeroed in on Del Rio (real name Roy Haylock) for a simple reason: “We felt Bianca’s fresh, edgy perspective was the perfect voice for Vimeo’s first-ever comedy special.”

Indeed, Del Rio gives edge. She channels the late, great Joan Rivers in the special, which was filmed at the Paramount Theatre in Austin, Texas, stating early on that “people get offended too fucking easily” these days. For the next hour, Del Rio stretches her imminently GIF-able Drag Race persona into an F-bomb-filled roast, pointing the white-hot firehose of hate at herself, the audience, and anyone within striking distance (including Selena, via a bit with an audience member), in an effort to offend multitudes.

The shout-talk delivery starts to wear after about 30 minutes, but once Del Rio brushes past some pretty tiresome racial stereotypes and gets into more personal stories about growing up gay in the South—as well as a pointed criticism of a younger gay culture that doesn’t know drag history—the special comes into focus a bit more.

Harnessing the popularity of High Maintenance, its first original series, Vimeo is now putting more weight behind original comedy: In addition to Rolodex of Hate, the site is debuting a special from YouTuber Elliott Morgan on Dec. 10, producing a series from SNL’s Aidy Bryant, and bringing in acclaimed webseries The Outs. In our current culture of political correctness and one-click outrage, Del Rio is certainly not going to be a mainstream hit, and whether the perspective is “fresh” is subject to interpretation, but if Vimeo’s leadership wanted some edge, they got it.