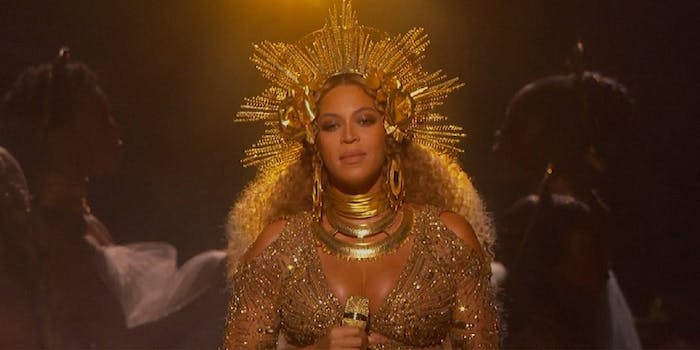 The suspense is too much to reasonably handle.

The moment we’ve all been waiting for is (maybe) upon us. Queen Bey is rumored to have checked into a Los Angeles hospital this week to give birth to her twins, and the Beyhive is freaking out. On Tuesday Hollywood Life reported that the Beyoncé entourage and security were spotted at a hospital in West L.A.

There is no official word as of this writing on whether or not she’s in labor—or even in a hospital—but that hasn’t stopped fans from losing it. The singer announced her pregnancy back in February.

Though rumors haven’t been confirmed, the Beyhive is on full alert.

Is Beyoncé in labor? Is Jay Z prepared? Will Blue Ivy check the twins right out the womb? Find out next time on DRAGONBALL BEY!! pic.twitter.com/R5wBJFvd9p

Since May some have been speculating that Bey has already given birth and that the twins are in hiding.

Beyonce gone post a picture in a week or two and the twins gone be 3 months old I'm sick.

It seems now that the twins are on their way, and it’s only fitting that the ultimate twins are Geminis. That’s like having four babies!

Beyoncé's twins are going to be geminis

The Gemini symbol is a set of twins pic.twitter.com/oWzvrhJ7TP

After months of waiting, fans are on edge and at a boiling point.

Some fans are skeptical and still waiting for the final confirmation from the queen herself.

Perhaps the most important factor in this new rumor is that if Beyoncé gives birth today, the babies could be born on President Donald Trump’s birthday—an apparently patriotic act of resistance.

You might even think this is the second coming.

Not everyone just wants to see the twins, though. Some want to be them.

I mean do we even need any more babies now that the twins are coming?

Beyoncé had her babies, we haven't seen them but she's had them and that means there's no need for anyone else to have babies. Keep them. pic.twitter.com/nszqinCN9I

Because they’re really OUR babies if you think about it.