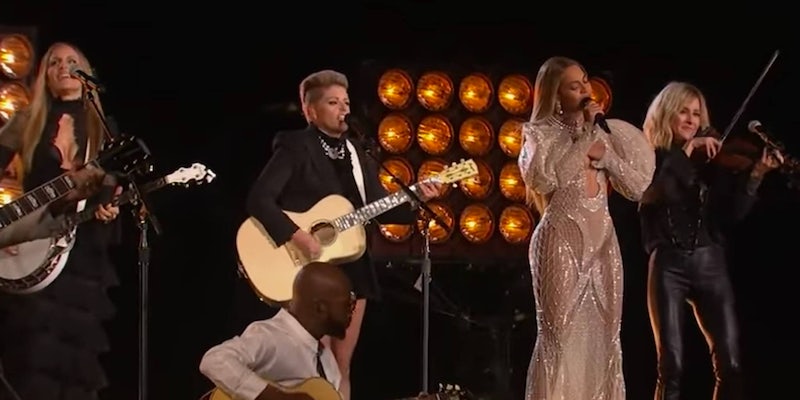 Warning: The language is graphic.

In one of the more inspiring collaborations in recent memory, Beyoncé joined the Dixie Chicks last night at the 50th annual Country Music Awards for a stirring rendition of Lemonade’s “Daddy Lessons.” It felt like a genuine pop culture moment—country music’s most progressive outlaw women sharing the stage with the biggest R&B star of our generation.

But not everyone was eager to see those bridges crossed: Beyoncé was hit with intense, racist backlash online. (Warning: The language is graphic.)

Shameful the #CMAawards50 allows a cop hating, Anti-American Racist on their stage! When did country music lose its way?#SellOuts #Beyonce

Not to conflate his reaction to the vitriol on Twitter, but country star Kenny Chesney also seemed thoroughly unimpressed.

Kenny Chesney was probably the only one who didn't like Beyoncé or the Dixie Chicks. https://t.co/SVwG9294X1

The backlash is disappointing, but it’s not surprising—just look at the homophobic attacks that followed Anderson Cooper’s moderation of the second presidential debate.

Beyoncé has been the subject of intense scrutiny from the conservative right since her provocative performance of “Formation” at the Super Bowl last year and the release of her masterful Lemonade, an album that addresses issues of personal empowerment, feminism, and social politics in the wake of the Black Lives Matter movement. She’s been accused of not being “wholesome” enough, of being responsible for recent law enforcement deaths, and targeted in backwards attacks on the character of Democratic presidential nominee Hillary Clinton.

So kudos Bey for taking country’s biggest stage and making it her own.