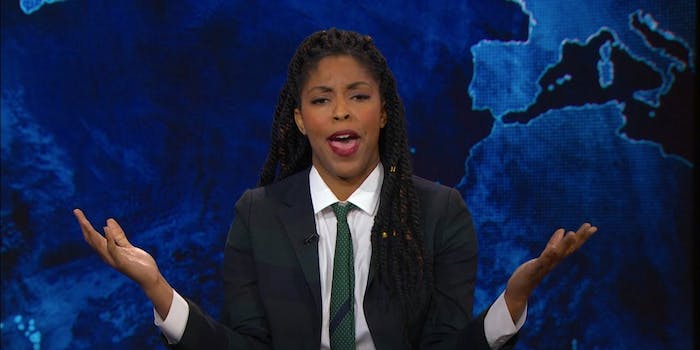 ‘You know what’s right in the middle of America? Ferguson, Missouri.’

Jessica Williams railed against the conservative pundits who took issue with Beyoncé‘s Super Bowl performance on Monday night’s episode of The Daily Show.

Beyoncé was a special guest at Coldplay’s Super Bowl halftime show Sunday night, but she easily stole the show with “Formation” and a back-up dance team dressed like the Black Panthers.

The dancers’ outfits paid tribute to the Black Lives Matter movement, the fight against police brutality, and black female empowerment. And while the Internet largely loved the Beyoncé portion of the halftime show, conservatives heaped scorn on it because of the singer’s political activism.

The criticism came mainly from former New York City Mayor Rudolph Giuliani, who accused Beyoncé of using her platform to attack the police and called for “decent, wholesome entertainment” at the Super Bowl.

Williams, The Daily Show’s Senior Beyoncé Correspondent, pushed back at the notion of the singer bringing politics into her music and the complaint that race somehow infected the Super Bowl.

Political activism is part of who she is, Williams said, and she’s been doing it for years. And as she tackled Giuliani’s suggestion that Beyoncé wasn’t fit for “middle America,” she honed in on a bigger issue.

“I’m sorry this wasn’t wholesome enough for you,” she said. “I didn’t realize that singing about race was equivalent to Janet Jackson getting her titty pulled out at the Super Bowl. But you’re right. You know what? The fans deserve wholesome entertainment: like watching 300-pound men give each other concussions while a crowd cheers like extras in the movie Gladiator. So what is wrong with Beyoncé, everyone? Were you not entertained?”