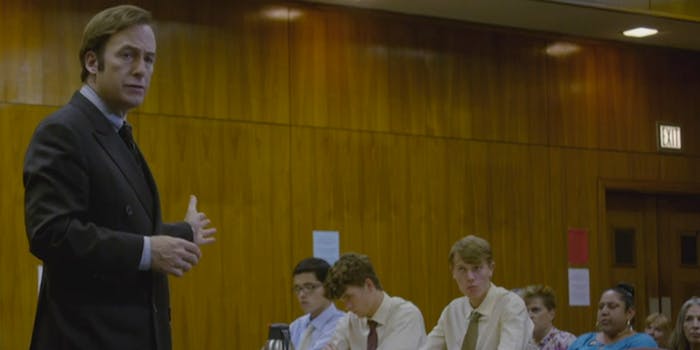 We all have to know about Slippin' Jimmy.

Did you get lost in the Grammys last night and forget to watch the debut of Better Call Saul?

Sunday night was an absurdly jam-packed night for TV, so you’ll be forgiven for missing one of the gazillion options. Better Call Saul debuted amid the chaos, and episode 2 airs tonight. Luckily, you can catch up on the first episode—and, it appears, every episode after—over on AMC’s website, for free.

Episode 1 sketched out the origin story of lawyer Jimmy McGill, Saul Goodman’s name before he met up with Walt and Jesse. There were concerns that BCS wouldn’t be able to support itself as a Breaking Bad spin-off, but McGill’s story about “Slippin’ Jimmy” proves maybe, just maybe, it’s Bob Odenkirk’s time to shine.

Still, the final scene introduces us to a character Breaking Bad fans are very familiar with, and the opening scene makes good on a Cinnabon promise, the best kind of promise there is.