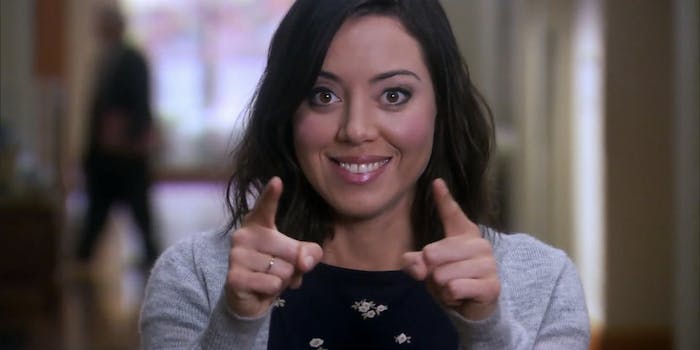 This Galentine’s Day, treat yo self to the 13 best ‘Parks and Rec’ episodes

Gather your closest girlfriends, get a stack of waffles from JJ’s Diner, and get ready to laugh.

Over the past seven seasons, Parks and Recreation has bestowed upon us some of the most indelible pop culture touchstones. From Ron Swanson’s moustache to a little lesson in treating yo self, there have been far too many priceless Pawnee takeaways to count. But perhaps the most precious of all the gifts the show has given us comes in the form of a humble little holiday known as Galentine’s Day.

This sacred celebration, which occurs every Feb. 13, gives women the chance to leave the men at home and revel in the special female friendships in their lives. While Leslie Knope might choose to go over the top with her gift-giving, the true meaning of this day is all about ladies bonding with ladies over brunch.

This Galentine’s Day, the Daily Dot has decided to gift you with a roundup of the best Parks and Recreation episodes available to stream on Netflix. So gather your closest girlfriends, get a stack of waffles from JJ’s Diner, and get ready to enjoy some hilarious comedy with the women in your life who matter most.

In the Parks and Recreation universe, things often have to go horribly wrong before they can be set joyously right, and “Galentine’s Day” is a classic example of the former. While many fans remember the episode for its glorious Galentine’s Day opening, what they forget are the multiple relationships that crumble as Valentine’s Day approaches. Luckily, John Larroquette’s guest appearance as Marlene’s long-lost love Frank Beckerson and an amazing senior dance provide some much-needed comic relief to this rather glib episode.

When it comes to summarizing this season 4 gem, the only three words you need to know are: treat yo self. While Donna and Tom come together to celebrate “the best day of the year,” we find Leslie and Ron at odds in the wilderness on how to best empower young children with a sense of independence and adventure. But don’t let the decadence of clothes, fragrances, mimosas, and fine leather goods distract you, the episode’s best moment comes when Ben Wyatt dons an highly intricate Batman suit and begins to cry. Also: puppy parties!

Ron Swanson is as strong and unflinching as a mighty oak tree, but bring around his ex-wife, and suddenly that majestic oak has been felled by a crazy axe-wielding librarian who goes by the name Tammy 2. This third season stroke of brilliance gives us Swanson in his rarest form, as he becomes totally intoxicated by Tammy’s temptations and ends up in jail sporting a mighty fine set of corn rows. Ron and Tammy 2’s chemistry is made all the more palatable thanks to the very real offscreen romance between Nick Offerman and Megan Mullally.

If there’s anything that can test the bonds of friendship, it’s Tom Haverford’s highly potent 140-proof alcohol known as “Snake Juice.” This episode puts Leslie and Ann’s relationship through the paces after the two have a drunken falling out during a trip to the infamous Snake Hole Lounge. But thankfully for fans, “The Fight” isn’t all Sturm und Drang. In addition to seeing all of our favorite characters blackout drunk, we also get a chance to spend some time with April and Andy’s alter egos, the enigmatic Janet Snakehole and notorious FBI agent Burt Macklin.

There truly is someone out there for everyone, and if ever there were an episode to prove that, it’s “Andy and April’s Fancy Party.” Those these two highly unconventional lovebirds seem to flounder on their own, but when united by the bonds of love and matrimony, they make an unstoppable force. After this episode aired, there were certainly a lot of men jealous of the fact that Andy got to wear a Colts jersey on his wedding day.

The only thing better than a penguin wedding is a gay penguin wedding, because a gay penguin wedding transforms Leslie Knope into the “queen of the gays.” You might be surprised to learn that the plot from this episode was pulled from straight from the news after the San Francisco Zoo found itself dealing with two male penguins who had become romantically involved. Gay penguin controversy aside, “Pawnee Zoo” gives us a glimpse inside the amazingly named gay club the Bulge and finds a drunken Leslie giving a stellar performance of Lady Gaga’s “Poker Face.”

Given that fans of other sitcoms have to watch their characters struggle haplessly through multiple relationships, it almost feels unfair that Parks and Recreation has given its devotees so many genuinely happy romances. But once again, fans of the show are treated to an episode that celebrates the love and happiness like no other as everyone scrambles to make an impromptu wedding happen. This is the only episode that stands a chance of topping “Andy and April’s Fancy Party.”

Only the death of Pawnee’s beloved celebrity miniature horse, Li’l Sebastian, could garner an episode of this magnitude. From a massive fireball that singes off Ron’s eyebrows to Andy’s touching tribute song “5,000 Candles in the Wind,” there has never been a bigger send-off for a horse so small. But despite all the pomp and circumstance, the best moment of this third season finale comes when Tom finally joins Jean-Ralphio’s production company, Entertainment 720, and we get a tour of their ludicrous office space.

Besides sharing a geographical border, Pawnee doesn’t have much in common with the neighboring city of Eagleton, which is exactly why this episode is so delightful. As each member of the parks department meets his or her Eagleton equivalent, we’re introduced to some of the best guest stars the show has ever seen. Sadly, June Diane Raphel’s obtuse Tynnyfer didn’t get a chance to stick around, but Billy Eichner’s constantly outraged Craig is luckily here to stay.

From nursing an injured Andy to supporting a flustered Leslie, Ann Perkins has been training to be a mom for six seasons now. Yet, this mid-season send-off finds this “beautiful tropical fish” taking on the role in earnest as the expectant mother moves out of Pawnee to settle down with Chris. This episode is considered by many to be literally one of the saddest episodes of the show’s entire run as the parks department is forced to say a tearful goodbye to a beloved couple.

Forget Jerry’s hilarious “Fart Attack”; the most frightening thing about this Halloween episode is the prospect that Leslie and Ben’s relationship could be falling apart because of the strain of long distance. Though it looks like Pawnee’s most tenacious government employee might be living alone in her newly leased home, the last two minutes will take you by surprise every time.

Parks and Recreation has come so far since its first season that it’s almost hard to imagine the entire show began because of an abandoned lot and a gaping pit. Yet, that singular plot line drove the majority of the first season’s story and brought us this standout season 1 finale. Though many dismiss the show’s first season as a learning curve, Leslie’s blind date with a much older man and a show-stopping performance by Mouse Rat might cause you to reconsider that position.

From perfumer Dennis Feinstein to Councilman Jeremy Jamm, the show’s writers have quite the knack for crafting some truly awful characters. But when it came to creating Jean-Ralphio’s sister Mona-Lisa Saperstein, the

Parks and Recreation team truly outdid itself. This Rent-A-Swag employee is as hilarious as she is horrible, which is saying a lot. Though Jenny Slate was only set for a brief guest appearance, the amazing abomination she created with Mona-Lisa has brought her back to the show season after season.