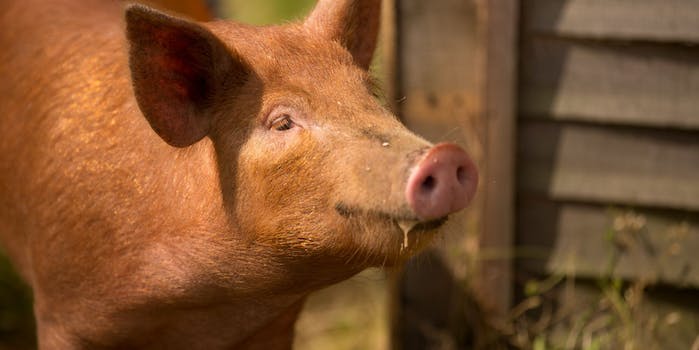 The U.S. presidential election is weird, but this is a hundred times weirder.

If you’re one of the most powerful men in the world, what do you do when someone publicly accuses you of performing a sex act with a dead pig? Do you deny it outright, or just hope the story will blow over?

British Twitter erupted on Sunday night over the Daily Mail‘s latest front page story, which focuses on David Cameron’s time at Oxford University. By far the most salacious detail is an unproven allegation that young Cameron “inserted a private part of his anatomy” into the mouth of a dead pig.

The story comes from an unauthorized Cameron biography written by Lord Michael Ashcroft, the former deputy chairman of the Conservative Party. In an excerpt published by the Daily Mail, Ashcroft says that Cameron performed the act as part of an initiation ritual for the Piers Gaveston Society at Oxford, an elite club known for its scandalous parties. Because Cameron is already known to have been a member of the Bullingdon Club, a similarly infamous Oxford drinking society, this isn’t as implausible as you might imagine.

The article also alleges that Cameron smoked weed and attended parties where his friends took cocaine, but let’s face it: no one cares when there’s a pig sex anecdote lurking elsewhere in the story.

There are politicians with dodgy pasts all over the country right now breathing a sigh of relief thinking "at least I didn't shag a pig".

Press conference
Cameron: Anyone have any questions
*everyone raises hands*
Cameron: That aren't about the pig?
*everyone lowers hands*

The Daily Mail‘s article is far from reliable, citing a Member of Parliament who claims to have seen photographic evidence of David Cameron’s alleged encounter with the pig. However, this lack of direct proof just fuels the public debate, because if the story isn’t true, then Cameron would have an excellent case to sue Lord Ashcroft and the Daily Mail for libel.

But if both Ashcroft and the Mail felt comfortable publishing such a shocking story, could this mean they do secretly have proof that David Cameron had intimate relations with a dead pig? Or are they just banking on Cameron wanting to avoid making a public denial of pig necrophilia allegations? As of Monday morning, the official response has been “no comment” from Cameron’s representatives.

The beauty of #piggate is you don't even have to do anything clever with your jokes. pic.twitter.com/s2w0inv5Oj

Earlier reports from other British news outlets treated the story with kid gloves, focusing on the minor drug allegations and ignoring the dead-pig anecdote. However, by Monday morning, the story had gone so viral that major newspapers were publishing headlines like, “Is it true that David Cameron had sex with a pig? It doesn’t really matter.” #Piggate has already been referenced publicly by other high-profile politicians, with the leader of the Liberal Democrats tweeting, “I’ve never been more pleased to be vegetarian.”

Just in case #piggate couldn’t get any juicier, there’s the fact that this scenario is bizarrely similar to the first episode of the dystopian satire series Black Mirror. Titled “The National Anthem,” the episode is a stand-alone story about a terrorist who blackmails the prime minister into having sex with a pig on live television. Black Mirror fans had a field day with #piggate, as did the show’s writer Charlie Brooker, who also works as a political commentator.

As of Monday morning, #piggate is firmly ensconced in the top slot of Twitter’s trending topics, and it will likely go down in history as one of the weirdest moments in Cameron’s career.

For once, the U.S. presidential race is not the most surreal political story in the news.

Photo via Arran Moffat/Flickr (CC BY 2.0)