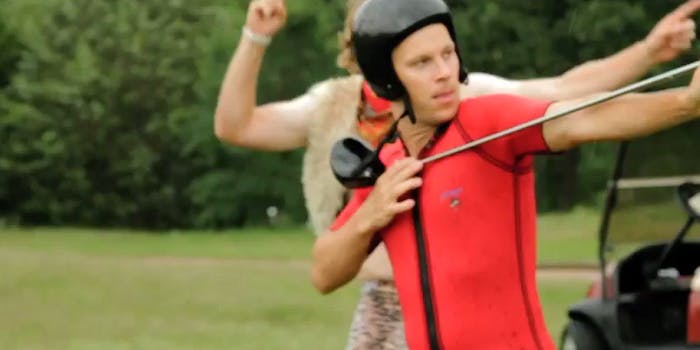 Golfer Ben Crane is third at Masters, first on YouTube

With a serious of charming YouTube videos and helpful tutorials, Crane is winning over new fans on the Web.

Golf is in dire need of a winner that the YouTube generation can get behind. For that, there’s Ben Crane, a 36-year-old masher blessed with a swing like Arnold Palmer and a deadpan sense of humor that has Reddit recalling Steve Carrell.

The Portland, Ore., native has been the talk of the town since his early success at this year’s Masters on Thursday, where a deadlocked focus and masterful short game has helped land Crane in third place after the tournament’s first 18 holes.

On the Internet, however, the conversation is less focused on the backswing that’s led Crane to a world golf ranking of 48th and more geared towards his unrivaled sense of humor. That’s best captured in a series of YouTube videos that’s seen a reemergence in light of the the golfer’s impressive opening round.

Crane’s first YouTube splash came via Oct. 2010’s “On Working Out,” a quick-cut video that found a helmet-donning Crane detailing all of the unorthodox workout techniques he employs to get ready for each weekend’s tournament. Encouraging aspiring golfers to “use the sledge wand” when they’re angry and “go straight to the snake shaker” if they’re stressed, the video amassed 400,000 views in its first two months and looks destined to break 900,000 views by the end of the weekend, making Crane one of the biggest viral stars the buttoned-up sport of golf has ever seen.

That January, he followed up “On Working Out” with “On Pre Round,”  a 90-second detailing of the golfer’s wacky meditation tactics and fourth-dimensional on-course habits, and “On Slow Play,” wherein Crane discusses his knack for making slow work on the greens.

Since, Crane has used his YouTube channel—bencranegolf—to offer tutorials and valuable hints to improve other golfers’s games. His sand trap tutorial has been viewed 8,000 times. His nine-second golf swing critique has been seen and debated by nearly 13,000 different fans.

No video of Crane’s has been more celebrated, however, than his music video for “Oh Oh Oh,” the rap parody seen by more than 3 million viewers that Crane made last summer with the Golf Boys, a group of jokesters that includes fellow PGA tour members Bubba Watson, Rickie Fowler, and Hunter Mahan. Dressed in his trademark black helmet and red body suit, Crane leads the disheveled bunch through a series of over-the-top dance moves that would make OK Go proud.

“that almost make me want to start following golf now,” wrote rwallin after watching the video.

“Time to start golfing,” echoed erocko. “Or at least tell people that I golf, then say that Ben Crane is my favorite golfer.”