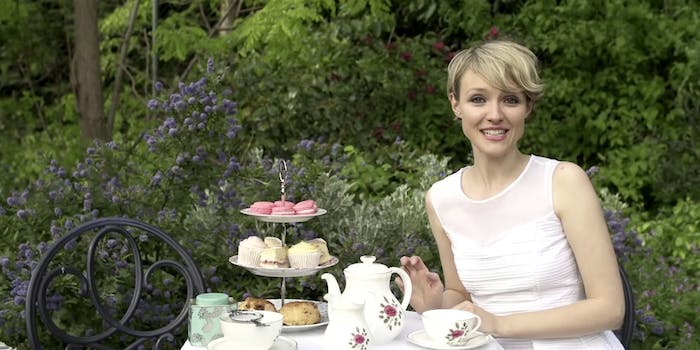 It's one-stop shop for everything you need to know about British culture.

Before we dive into our latest lady-lovin’ segment, I feel it only right to confess that I—Carly Christine Lanning—am slightly obsessed with British YouTubers. Maybe it’s their accents, quick wit, love of tea, high-quality content, or knack for deadpan humor, but whenever I’m asked who my favorite creators are (which happens often when your job is in video curation), I begin rattling off my long list of British favorites until the question asker’s eyes glaze over and they begin wondering when my lungs will run out of oxygen.

So it should be no surprise that this week’s #WCW is dedicated to one of the very best British YouTube channels, Anglophenia: a one-stop shop for everything you need to know about British culture. Created by the BBC, each video perfectly blends comedy and education to explore the quirks and whims of British lifestyle and history with favorites like “If Shakespearean Insults Were Used Today,” “Brits vs. Americans: Clothing Words,” and the channel’s most popular video to date, “One Woman, 17 British Accents.” Want to learn about how Brits celebrate Christmas or who the real Sherlock Holmes is? Anglophenia has all the answers.

Since its creation a year and a half ago, the channel has gained over 8.9 million views, a statistic heavily influenced by the charm of the show’s hosts and writers, Siobhan Thompson and Kate Arnell. Taking over for Thompson two months ago, Arnell previously worked as a host for MTV and Disney before moving to YouTube. And in her new role as Anglophenia’s queen that she’s taught the world its most important lesson: how to make a proper cup of tea. Alongside the weekly videos, Anglophenia boosts a popular blog covering the most important tidbits of British pop culture that have kept the channel’s viewers across the pond up to date on all things ranging from Sir Ian McKellen and Doctor Who, from British summer cocktails to Harry Potter personality quizzes.

Anglophenia is just one of many great examples of how the BBC is infiltrating the digital media space. This past year, the network has begun tapping the talents and audiences of long-time YouTube creators such as Jack Howard, Dean Dobbs, Ben Cook, Dan Howell, and Phil Lester by giving them their own BBC Radio shows. And should you be in the market for more British creators to fall in love with, might I also suggest Carrie Hope Fletcher, Lex Croucher, Hazel Hayes, Daniel J. Layton, and Dodie Clark for starters.