You may have not have heard of  Jeff Matsuda—until he hit Reddit.

Savvy celebrities and companies know the best way to promote themselves on social news site Reddit is with a live question and answer session (an AMA, or “ask me anything”).

But to make an AMA successful, you need to do a lot more than just show up (unless you’re Bear Grylls). You’ve got to put in a whole lot of leg work.

Matsuda’s AMA became a huge success on the site, easily breaking onto its front page. His goal? Drum up a little publicity for a mobile game, Age of Monsters, which his new company recently released. How did he make it work? By hand-sketching whatever redditors asked him to. He was upfront about his promotion all along. And the results were weird, gorgeous, and a whole lot of fun.

While you may not know  Matsuda’s name,  if you watched cartoons sometime last decade, you’ve probably seen his work. He was the artistic director for The Batman, an Emmy-winning animated series that ran on the Kids WB network from 2004 to 2008.

Below, we talk to Matsuda about how to do a successful AMA on Reddit. While most people probably don’t have his drawing skills, the basic lesson is this: what you get back from the Reddit community is equivalent to what you give. We’ve posted a few of Matsudas drawings from the thread (with permission).

DD: Your game is the latest project out of your company, Massive Joe studios — did the company plan the IAMA out beforehand? Or were you just sitting around the office one day and decided “I feel like drawing dozens of sketches for redditors today.”

We [at Massive Joe Studios] have wasted far too much time on Reddit, especially my co-founder Mike Su. So from the get go we thought it would be a really fun way to promote our game. We thought given all the other IAmA’s we’d seen get traction, that this had a shot to do well, but we by no means expected it to go as well as it did. Also, hats off to the redditors, the ideas coming in were even more hilarious/touching/awesome/obscene than we’d expected, and while I drew things, it was really the suggestions from the community that made it awesome. I mean, we started with Spock and Batman high fiving, which you’d think it would be all downhill from there, but it just got better. 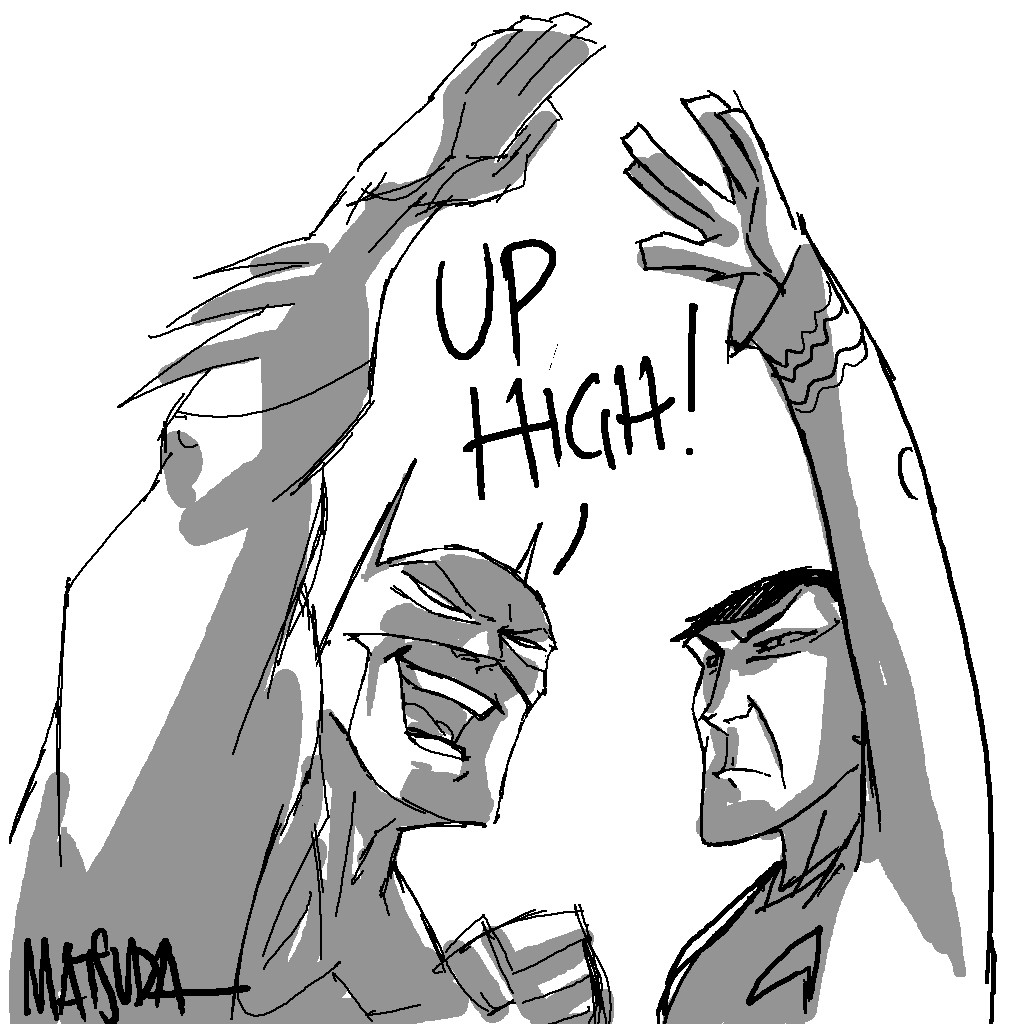 DD: How many sketches did you draw in total? Any that were particularly challenging/rewarding?

I did 18 sketches, and uploaded a number of sketches from my old sketchbooks. While the Spock/Batman high five was one of the most popular, it was also the one I feel like a fifth grader could have drawn and I cringe when I look back at it. I feel like I definitely started hitting stride though, and Breaking Batman was probably the most fun. Towards the end I was also running out of steam a bit. So, for next time, if you want to get a good drawing out of me, try to time your request for mid-day ;) 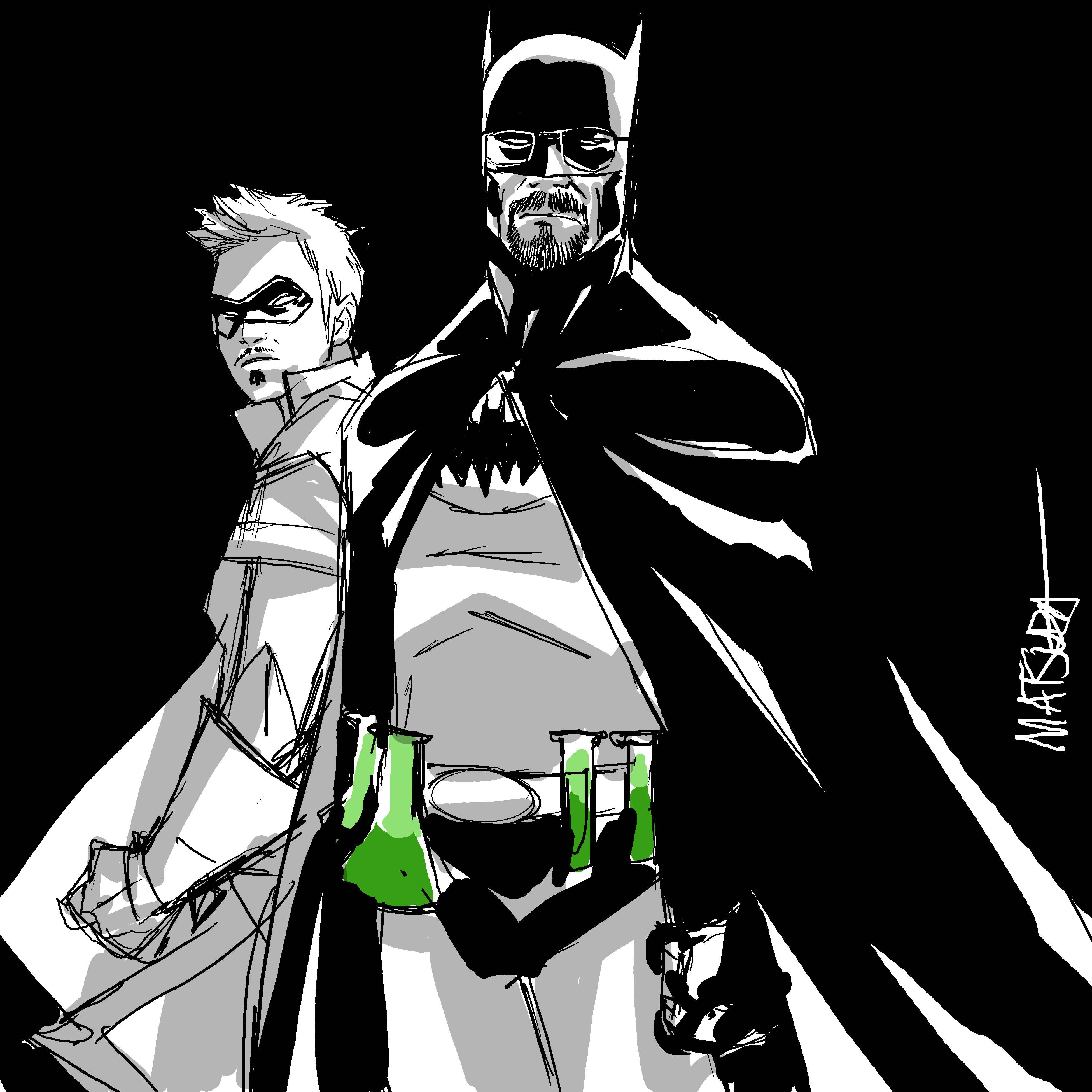 DD: How much time did you spend? Were you basically sketching all day?

So we actually created the IAmA around 10am, but for whatever reason it wasn’t showing up. We were pretty bummed, cause we really thought it was going to work and we weren’t getting a single comment. So Mike and I went to an early lunch at  11 am, then came back around noon and emailed the moderators. Something got fixed and basically from about 12 to 6 pm was non-stop drawing. We grabbed dinner from 6 to eightish, and then drew for another two to three hours. So it was more like eight to nine hours probably.

DD: Beyond the promo for your new app, how did you benefit from the AMA? I mean, were there any really great interactions you had? Anything you learned from redditors?

Again, this thing went way beyond our expectations. We were cracking up the entire time with the requests and the discussions going on. I wish I were half as creative as the redditors. It was great hearing from the fans of the show. It just blew my mind away getting such direct interaction with fans of the show and new fans. It’s always fun to see reddit discussions go insanely detailed on hypothetical scenarios, so it brought me endless pleasure to read the Batman vs. Superman discussion.

I just wish I could draw faster or we had more time, as there were so many great requests, and so many personal requests that I didn’t get to do. That was the tough part. I tried to do things that I thought most of the community would love, rather than personal ones (with the exception of that one birthday one I did at the end because my heart is only partially made of coal). But there were so many requests for friends etc. that if I had more time to do would love to do. But alas, we have a gaming company to build :) 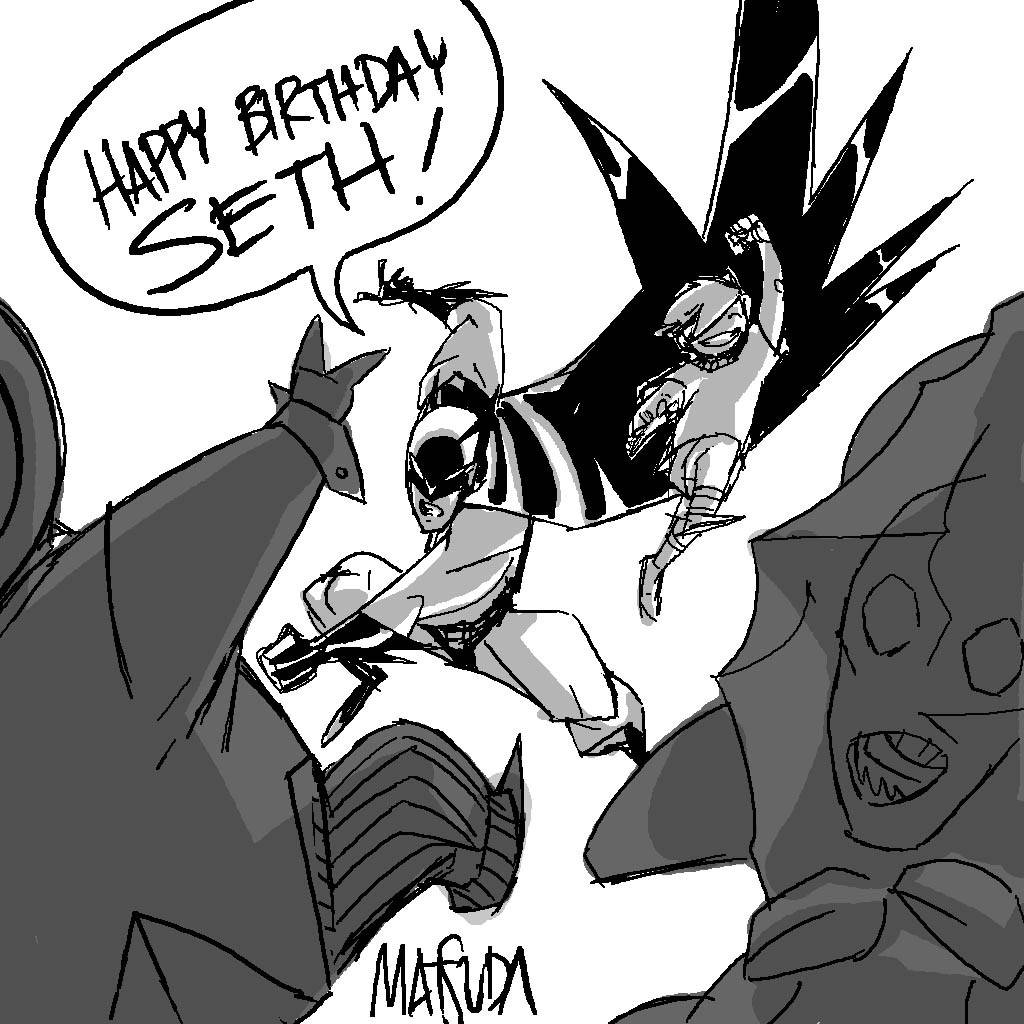 DD: Redditors seem to be pretty well aware of the fact that many people use r/IAMA as a way to promote something — and they don’t really care, so long as they’re given something in return (which obviously you did). So I’m wondering: How much did the AMA help your app launch? Can you give us any numbers to show much attention it brought you?

There are few communities on the Internet as righteous as the Redditors. Reddit is like that friend from high school that we all have. If he’s on your side, he is fiercely loyal and will take a bullet for you and beat up anybody that so much as looks at you funny. But if you’re not on his side, then he’ll do things that make you want to call the cops and get a restraining order. He’s not irrational, just not moderate.

So there’s always that risk when promoting. But our thought was if we’re sincere, and provide something fun and entertaining first and foremost, the community would reward us for that. While I can’t share hard numbers with you, this Reddit thread probably did just as much as all of the other launch-related activities we did. The best part was seeing five star reviews in our appstore with “Hi from Reddit!” or “Reddit sent me.” There is something that’s just so fascinating and amazing about this sort of family culture Reddit has cultivated that is really special and I was really amazing to be a part of first hand. 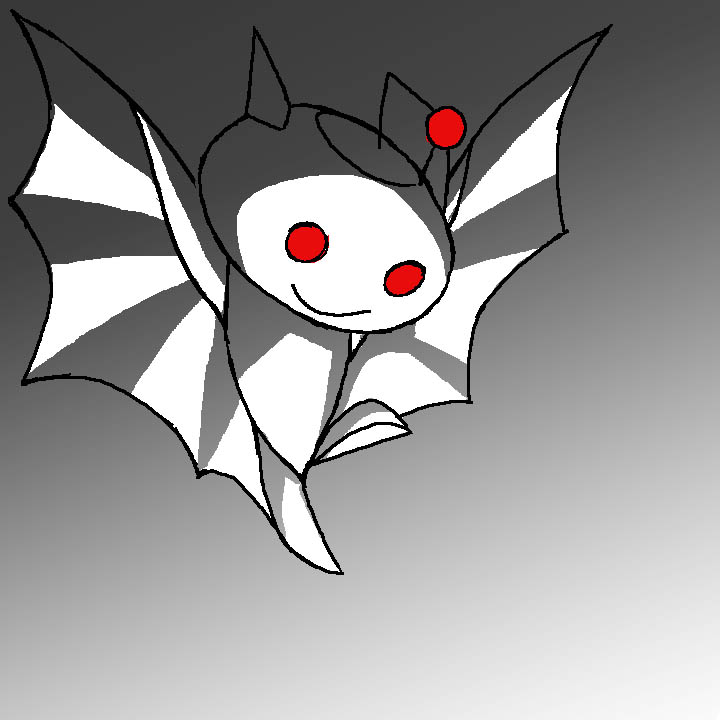