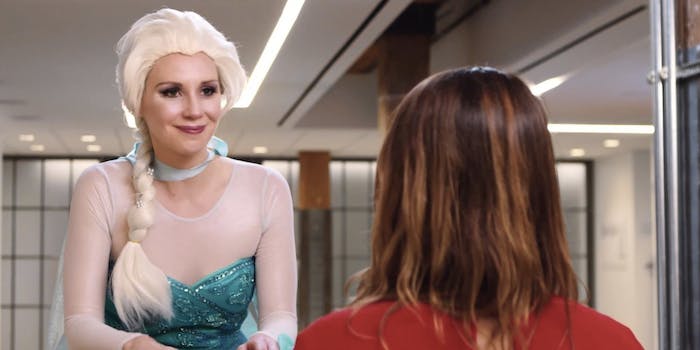 Ah, the traditional airing of grievances.

As has become a yearly VidCon tradition, Barely Political has used its YouTube channel for an airing of grievances. The comedy hub led by Mark Douglas and Todd Womack has released YouTube Complaints 2014, in which a constant stream of guest stars collectively crabs about the problems facing YouTube today.

As in previous years, the YouTube Complaints are a mix of significant issues and light-hearted parody.  The video brings up the round-the-clock nature of YouTuber life, the occasional choppiness of the site’s live streams, and, of course, the Google+ problem (though that one seems to be near a resolution). At the same time, it takes satirical aim at the excessive number of Frozen covers on YouTube, the “sheepish” nature of the site’s British vloggers, and the overwhelming popularity of the “Let’s Play” genre of gaming videos.

Mark and Todd make multiple appearances in the video, and they’re joined along the way by plenty of familiar faces. Guests in this year’s edition of YouTube Complaints include The Gregory Brothers, Dude Perfect, Rhett & Link, and Jake Roper of Vsauce2.

Some may see the YouTube Complaints videos as sour grapes, but it’s important to remember that it’s in good fun. Mark and Todd are two of YouTube’s most lovable curmudgeons, and they tend to have genuine respect for the creators and institutions that they mock. This video should be taken in stride, but it’s also an important reminder that, as great of a resource as it is, YouTube isn’t perfect. The new video hits on some areas where the site can improve; otherwise, we can expect some of the same complaints to pop up in the 2015 edition of the YouTube Complaints Desk.