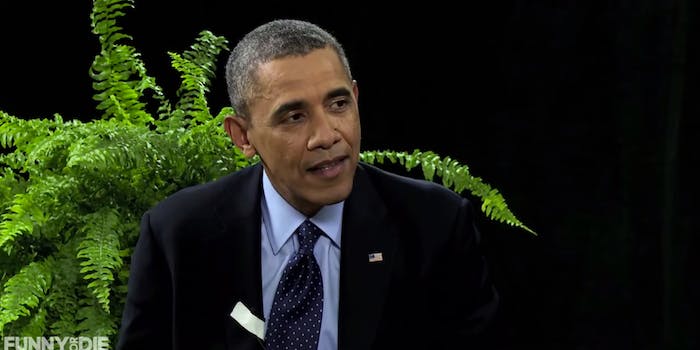 President Obama’s ‘Between Two Ferns’ interview got an Emmy nod

He's the POTUS with an Emmy nomination.

President Barack Obama may have another title to add soon to his collection: Emmy winner.

In the interview, Galifianakis and Obama traded zingers back and forth on topics ranging from the abysmal third Hangover movie to what it was like being the “last black president.” The episode’s success prevented Funny or Die from loading properly, and it’s been watched more than 22 million times to date.

Obama urged the site’s younger audience to sign up for the Affordable Care Act, is credited with increasing traffic to Heathcare.gov 40 percent.

White House aides congratulated Obama and the other nominees on Twitter.

Between Two Ferns with POTUS just nominated for an Emmy!

The Creative Arts Emmys will take place on Aug. 16.

H/T The Hill | Photo via Funny Or Die/YouTube