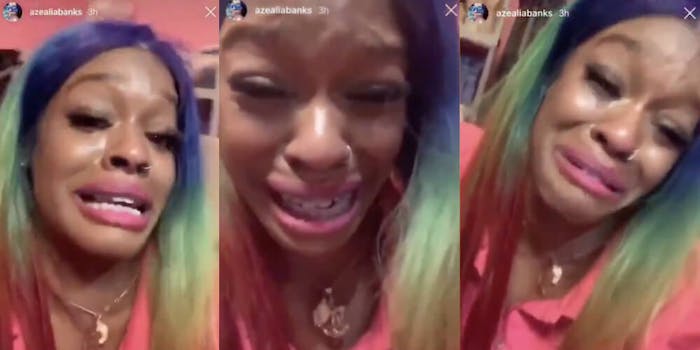 She asked nearby fans to come to her house.

In a series of videos posted to Instagram on Wednesday, artist Azealia Banks asked fans to come to her rescue after one of her white neighbors allegedly threatened her with a gun.

Banks says that the neighbor identified himself as a criminal attorney, spewed slurs at her, and pulled out the gun.

“I don’t even know who this [N-word] is. He was like, ‘Oh, I’m a criminal attorney and I’mma put you in jail.’ I’m just like ‘for fucking what,'” she recalls him saying to her.

She says that as a Black person, she was afraid to get the police involved. Then she urged fans who were nearby her home to help her.

Fans heeded her distress call by going to her house. One fan, who streamed their visit to her house, wrote on Twitter that Banks “was in a good place when [they left].”

“We were just all talking about all different kinds of things and we were just laughing and having a ki lol i think that made her feel better,” they wrote.

Azealia Banks shares alarming cry for help on Instagram, urging fans to come to her house after a neighbor pulled a gun on her:

Banks says that this isn’t the first time the neighbor has threatened her.

“This is the second fucking time,” she says in one video. “He does the same racist spiel, and the way he pulls the gun out, he knows he can just shoot me and kill me.”

“Thanks to everyone who came to me and everyone for being super vigilant about this. I’m leaving here tomorrow but felt it was important to make my whereabouts public in case this crazy guy decided on anything strange,” she wrote in an Instagram Story. “That was a lesson in adulthood because I never want to be that afraid ever again.”