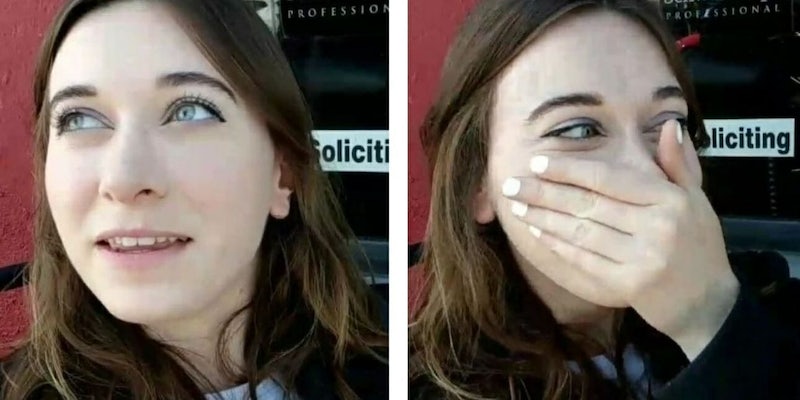 He escalated the confrontation exponentially with his misogyny.

Twitch streamer AyyTrae was seemingly minding her own business during a livestream on the streets of Los Angeles earlier this week when she was verbally harassed by an apparent stranger.

AyyTrae, who has close to 9,000 Twitch followers, was livestreaming herself when a man approached and said, “Excuse me, have you ever heard of a psychological condition called clinical narcissism?”

Said the man, “I’m pretty sure you have it.” He then chuckled and continued down the street.

“Thanks, bro,” she called after him.

Then, the man escalated the encounter exponentially by saying, “Suck a dick, cunt.”

“It’s OK,” AyyTrae said to the camera before covering her mouth in surprise. “I hope he stays away,” she continued.

In the ensuing days, that clip has been watched close to 100,000 times (as of this writing), and on Reddit, most people defended AyyTrae from the verbal attack.

“I really hate that the act of people wanting to connect with other people online is considered narcissistic by guys that are cynical about others who are brave enough to put themselves out there,” redditor miumiux wrote. “Humans need attention (social support) for good mental health which is why these platforms exist in the first place.”

Though this one incident could be seen as a frustrated man taking out his aggressions on AyyTrae, she said it speaks to a larger problem for females in the Twitch community.

On Twitter, AyyTrae wrote, “It’s no wonder why a lot of female irl streamers feel unsafe outside.”