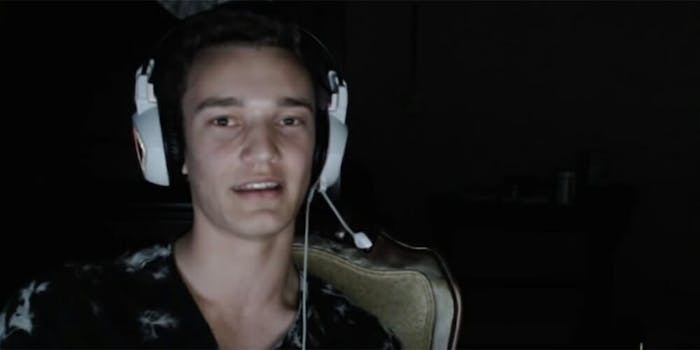 It points to a larger problem.

Twitch streamer HelixFlame received an indefinite suspension this week from the service after broadcasting a video of a woman suggestively dancing. HelixFlame streamed the video, waited for his channel to reach over 100 viewers, and then called out those watching for being part of a program currently plaguing the streaming service.

He said his stunt shows “the poorly structured rules they have set up in [the Just Chatting] category,” HelixFlame told the Daily Dot. Regarding the current state of Twitch, HelixFlame said, “The past few years they’ve been progressively going downhill and eventually if they don’t start listening to their community I believe they’re gonna hit a brick wall.”

His video came with color commentary.

The partnership program is a way for streamers to get revenue from Twitch that requires a consistent audience.

“I’ve been streaming for just over two years inconsistently and mostly just for fun until recent months when I hopped on a slight grind,” said HelixFlame. “I typically average just around if not a little more than 10 viewers.”

The original clip is no longer available as HelixFlame’s entire channel has been removed from the site, but it has been reposted here. “After the clip blew up my stream peaked at around 480 viewers,” said HelixFlame.

Twitch said its official grounds for suspension were “sharing or engaging in sexually suggestive content or activities,” as revealed in an email received and later shared by HelixFlame. In a video response to his suspension, HelixFlame refuted the reasoning and provided a list of channels that weren’t banned for posting suggestive content.

He described these clips as “just as bad, if not, even worse than what I was streaming.” Women are regularly attacked by gamers with sexist criticism about not being authentic community members. These men often complain about double standards. Without official statements from the service, the issue has been left to theorization and conjecture. Twitch has previously told the Daily Dot that it doesn’t comment on individual suspensions.

To expand the scope of content on the streaming platform, Twitch introduced an IRL section in late 2016. The service immediately faced problems with the nature of the content being broadcasted under this category. From streamers saying “depression is the stupidest thing in the world,” and even a streamer getting shot in the leg by a security guard, this type of Twitch content is poorly regulated.

In August, Twitch dissolved the IRL category. An attempt at a rebrand was made with new categories such as Hobbies & Crafts, Beauty & Body Art, and Just Chatting. Streamers who previously used IRL quickly adapted to these new categories. Streams available now include body paint streams, cosplay building streams, and streamers openly admitting the nature of what they’re willing to do for viewers and donations.

At least one commenter on the r/LivestreamFail subreddit theorized that HelixFlame’s severe punishment has handed down because his case borders on impersonation. “If he was restreaming her stream without her content that would probably still fall under the impersonation clause in Terms of Service. If it was a YouTube video it wouldn’t,” the user wrote. Twitch’s official statement to sent to HelixFlame debunks this theory, however.

As HelixFlame’s suspension is “indefinite,” the fate of his Twitch channel is currently in limbo. When asked on the likelihood of his return to Twitch, HelixFlame told the Daily Dot, “I’m fairly confident that I’ll be unbanned.” Twitch did not immediately respond to the Daily Dot’s request for comment.