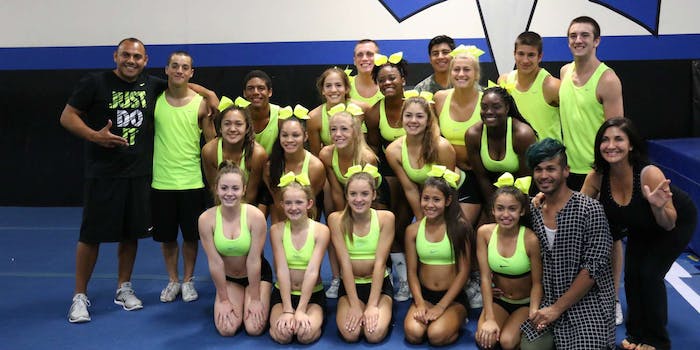 AwesomenessTV series showcases the rough and tumble side of cheerleading

Two, four, six, eight: These cheerleaders are intense athletes with a fandom all their own.

Coach Eddie Rios shouts instructions and encouragement at the 20-plus teen athletes assembled on the mat in front of him.

“Don’t touch out if you’re already down!”

“All these standing fulls being born, I love it.”

It’s a scene from a recent episode of Cheerleaders, an AwesomenessTV docuseries in its fourth season that follows SMOED, an all-star competitive cheer program with four consecutive world titles under its belt.

“Anytime there’s reporters or stories on cheerleading, it’s usually about injuries, or the pageant aspects, or the sexualization of females in the sport,” explained Rios about their participation in the show. “That’s not where we wanted to go with this. We wanted to show how hard we train, how these kids are truly athletes, and how successful they can be at a sport.”

Rios is an 18-year veteran of cheer who went from cheering at the high school and college level to cheering professionally with the Los Angeles Clippers before starting coaching competitive cheer with SMOED.

When AwesomenessTV originally pitched the idea for the reality show after the 2012 cheer season, Rios said they were “apprehensive,” but eventually understood that the series would focus on the intense training and work it takes to win titles.

“We’ve always trained hard prior to the show … and bringing cameras kind of amplified the whole situation,” he said, but he concedes that sometimes life would be easier with the cameras off. “There are times when you just want to be a team, and say and do the things you need to in order to make things happen, but we put ourselves in that situation for the positive of the sport and to help promote the industry. It’s a double-edged sword, and I’d do it again in a heartbeat.”

The final episode of season 3 was titled “The Final Farewell,” promoted as the team’s goodbye to the series. According to Everything Cheer Magazine, SMOED pulled out of the season and was replaced by Central Jersey All Stars Team Gunz for their own season. Rios and fellow coach Orby fronted a series called Cheerhab, where they worked with a struggling team in the same way they treated their all-star team. But just months after that “farewell” episode, SMOED is back on AwesomenessTV running episodes every Saturday, even as the team itself faces drastic turnover rates.

“Every season we turn over half our team,” Rios said. “This year we had six returners and 14 new athletes on the floor. It’s a big turnover, and essentially a brand new team. I’m a little nervous, but also really excited for these kids.”

The teammates hail from outside of California and even outside of the country, which means in order to compete in the year-round sport with SMOED, teens have to transplant their lives to Ventura, California.

The show also generated fevered fandom on social media—even fanfiction dedicated to the teen stars of the show. Rios said it’s his job to keep the team grounded and focused on their tasks, despite the “world of social media” surrounding them.

“We try to remind them that it doesn’t matter if you have millions of followers around the world if the 19 other people you’re standing on the floor with at practice don’t follow you and don’t believe you,” he said.

In fact, Rios even hesitates to call the people who flock to the show or his team “fans,” preferring the term “supporters.”

“It keeps the kids grounded, [so] they’re not thinking it’s more than what they think it is,” he explained, laughing. “We’re cheerleaders; we’re not Beyoncé.”