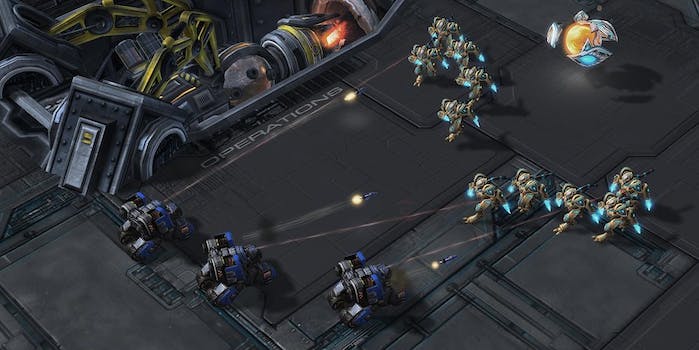 Automated tournaments are coming to the StarCraft 2 expansion beta

The highly anticipated feature is now playable on the Legacy of the Void beta.

As a game in the franchise that started esports, StarCraft 2 was one of the first titles to incorporate esports into its development. But it sure is missing a lot of esports functionality. Five years after the release of the title, Blizzard is finally trying to fix that problem.

A feature long pined for by the game’s esports fanbase, automated tournaments, is coming to the beta for the upcoming StarCraft expansion, Legacy of the Void.

Blizzard stressed that the beta uses a “very early implementation” that’s lacking planned functionality and is bound to have bugs. But that’s why it’s bringing it to Beta now, to smooth out the kinds before the expansion’s release.

The only way to play competitive multiplayer in StarCraft 2, outside of custom games, is to queue up for the ladder. That’s a harrowing process that often afflicts players with something called “ladder anxiety”: the fear they’ll lose and drop in rank. Plus, the ladder doesn’t mimic some of the features of tournament play, like a map selection process or best-of series.

Automated tournaments aim to fix that by offering players of all skill levels a more structured way to compete.

In the new system, players will sign up for an open tournament and select their race. Weekdays will feature three-round, single-elimination tournaments aimed to last 60 to 90 minutes, while weekends offer a lengthier experience with a group stage feeding into a bracket and a three- to four-hour target time.

The tourneys feature a map veto system similar to professional play, in which each player vetoes three maps for every round of the tournament.

To ensure events don’t get out of length (a single match can last hours under the right conditions), Blizzard will enforce a 25-minute time limit. After that, a player will be declared the victor based off an “experience point” system, which rates play based off metrics like money earned and units destroyed. With the sweeping changes to the speed of the game coming with Legacy of the Void, that 25 minutes equates to about 35 minutes in the current expansion, Heart of the Swarm. That means the vast majority of matches will finish up by that point. But it remains to be seen whether strategies will emerge that exploit the scoring system and draw out games.

Regardless, the automated tournament addition is certainly a welcome change, even if it’s a little late. Fans have been clamoring for something similar since the game’s launch, but it’s taken until now for players of any skill level to have a way to experience a tourney environment.

Blizzard indicated the feature was coming at Blizzcon last year, but it’s hardly a new idea. In fact, WarCraft 3, Blizzard’s 2002 real-time strategy title, ran its own automated tournaments. It’s better late than never, but fans pining for an esports renaissance for one of the pastime’s most storied games hope its not too little, too late.