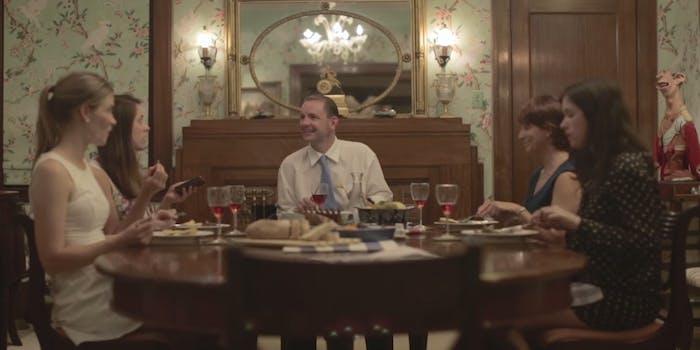 Screengrab via At Home With Tone/YouTube

The world’s most incompetent leader gets his own webseries

If you aren't from Down Under feel free to laugh.

You may not be familiar with Australia’s prime minister, Tony Abbott—recently named the most incompetent leader of any industrialized economy—but whatever your politics he certainly makes for fascinating viewing.

Picture this: You’re copping a battering in the approval polls, reeling from yet another misjudged statement, so to get the cause back on track you pick out something safe from your playbook, right? Wrong. That’s not Tony’s style. What you do is inform the public, unsure as to the future relationship of the monarchy to its nation, that you are knighting the similarly gaffe-prone, completely non-Australian Prince Philip.

Some saw the funny side:

Giving a Knighthood to Prince Philip is like giving a Beyoncé CD to Jay-Z. Surely he could just pick one up at home.

While other, former Australians were incensed:

@sprocket___ Abbott knighthood a joke and embarrassment. Time to scrap all honours everywhere, including UK.

An odd choice perhaps but at least he couldn’t be accused of vacillation—unlike the famously rational Caligula, who was unable to follow through on his conviction to make Incitatus a consul.

So in what may well be the final days of his prime ministership, it shouldn’t come as a surprise that such comically fertile material is finally getting its own webseries, At Home With Tone; an attempt to satirize what some may say already appeared to be some sort of parody of leadership.

All the hits are covered: the entirely unnecessary scholarship that was arranged for his daughter (he’s the prime minister, did he really think no-one would notice?), the “Canadia thing,” as well as this moment of creepy, winking weirdness when he appeared, for some unexplained reason, on Big Brother:

Though, the mocked “speed dealer sunnies” look pretty flash to me. Especially when compared to what he normally wears.

Now it would be nice to paint Abbott as a mere Rhodes Scholar who post-election succumbed to some Kurzian power-meltdown. But luckily for At Home With Tone there is a whole lifetime of material ready for use in future episodes. Indecent assault at university? Check. Dropping out of a seminary. Check. Fathering a child when you were 19 who was then adopted and then finally reuniting after 27 years with great fanfare and love—with the bizarre coincidence that many times, unbeknownst, son had been in the same room as father in his role as a boom operator—but then realizing that perhaps after all the hullabaloo and hugs and press conferences that maybe you should arrange a DNA test… Check.

It really is all quite strange. And while many of the 24 million Australians that he leads may struggle to find the humor in At Home With Tone, if you aren’t from Down Under don’t feel obliged to follow suit. Feel free to laugh. Or like Tony, say nothing at all:

Screengrab via At Home With Tone/YouTube