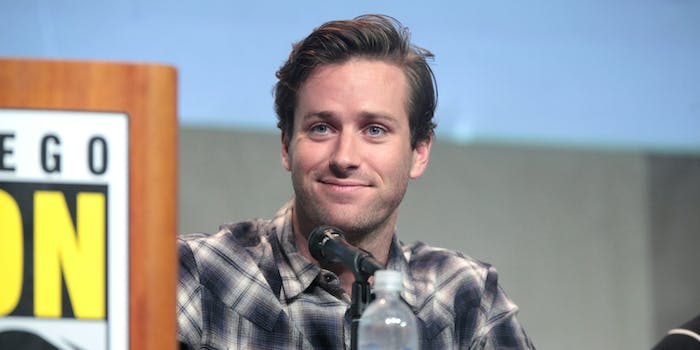 He did not enjoy being called a failure.

Armie Hammer had some words for BuzzFeed in response to a long-form feature that detailed the past 10 years of his career, carefully explaining how he is a failure.

Published on Sunday, the 6,000-word article entitled “Ten Long Years of Trying to Make Armie Hammer Happen” lays out the argument that Hammer is a “beautiful, pedigreed man” who has been given dozens chances to succeed in Hollywood but has failed to find his niche.

Writer Anne Helen Peterson argues that Hammer’s endless opportunities represent his white privilege and symbolize the systemic issue that is ongoing in Hollywood.

“Ultimately, the problem isn’t that Armie Hammer was given this many chances to happen,” she wrote. “It’s that the system that ensured those chances—along with those given to so many other white men—also withholds chances, leeway, and faith from those who need and would benefit from them most.”

Although the article could be seen as a look into the systemic issues in Hollywood through the perspective of one man’s career trajectory, Hammer obviously perceived a story that picks apart every detail of his career as a personal attack.

“Your chronology is spot on but your perspective is bitter AF,” he wrote. “Maybe I’m just a guy who loves his job and refuses to do anything but what he loves to do…?”

Your chronology is spot on but your perspective is bitter AF. Maybe I’m just a guy who loves his job and refuses to do anything but what he loves to do…?

After Hammer’s response to BuzzFeed, other individuals responded on Twitter. Some agreed with the actor, some sided with the news publication. The responses to his tweets have now morphed into a discussion about the systemic injustices in Hollywood.

…in a system that has given you the privilege to refuse to walk away because, as a handsome, wealthy white man, you are given opportunity after opportunity even after failure. Something women and people of colour are rarely given. Which is worth some introspection.

One could argue that this demonstrates 10 years of Armie Hammer proving, time and again, why he deserves to "happen".

But it's not so much about you as it is about white men in your industry – you get that, right?

Petersen responded to criticism yesterday. She said she wasn’t trying to say that Hammer is an asshole or critique him as a person, but was criticizing his “star image.”

It's really true. I even catch myself doing this. But analyzing a star image is not the same thing as "hating" the actor behind it. https://t.co/YO1Wp1Abah

Peterson has not, however, publically responded to Hammer’s criticism about her story as of press time.