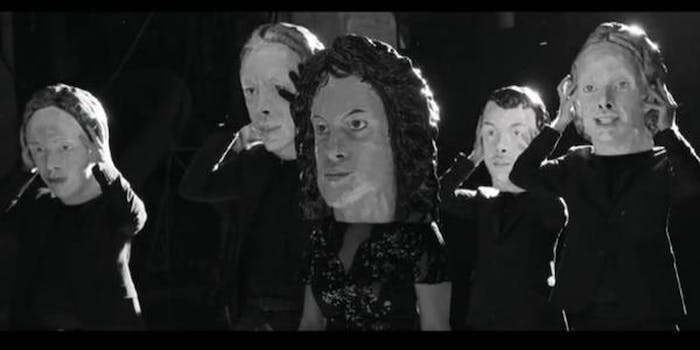 Stop everything and listen to Arcade Fire’s new record

The most highly anticipated new album of the year is streaming on YouTube.

Last night, someone in the Arcade Fire camp released a temporary, full-album video stream of the band’s fourth LP, Reflektor, due out Oct. 29.

Set to Orfeu Negro (Black Orpheus), the 1959 film from French director Marcel Camus that takes place during Carnaval in Rio de Janeiro, it’s arguably the greatest lyric video ever uploaded to YouTube and a sly nod to the album’s Caribbean influences. I’m only 25 minutes in of the near-hour-and-a-half listen, but the teaser film syncs better than Dark Side of the Moon and The Wizard of Oz.

Early reviews have hailed Reflecktor as a modern masterpiece. “Reflektor is closer to turning-point classics such as U2’s Achtung Baby and Radiohead‘ Kid A,” David Fricke wrote in Rolling Stone review, “a thrilling act of risk and renewal by a band with established commercial appeal and a greater fear of the average, of merely being liked.”

Oddly, the the teaser went live not long after Billboard reported that YouTube is looking to to launch a music-streaming service. Arcade Fire just inadvertently proved how unnecessary such an endeavor would be.

The band is also scheduled to perform at the first-ever YouTube Music Awards on Nov. 3.