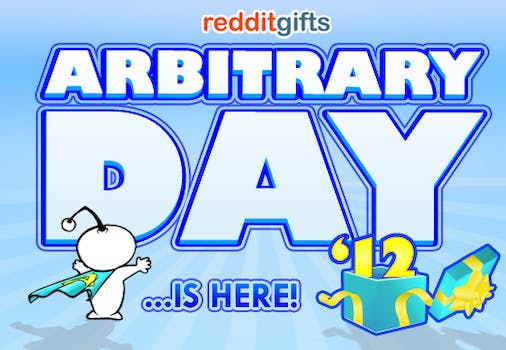 Sign up for Arbitrary Day, Reddit’s Christmas in July

There's nothing arbitrary about this gift-giving holiday.

At 40,000 people, Reddit’s secret Santa exchange is by far the largest in the world. The community’s proclivity for anonymous gift giving is so insatiable, in fact, that in 2010 the site created its own holiday: Arbitrary Day.

The holiday is basically a non-denominational Reddit Christmas in July, meant to sate redditors’s appetitive for generosity halfway through the year. Users register, get matched with a partner, and send each other gifts. Sign-ups for this year’s exchange began late Tuesday.

The holiday just happens to fall on the same date as Global Reddit Meetup day, when redditors around the world organize Reddit-themed parties.

Last year, 7,000 people in 71 countries met up and redditors sent more than $250,000 in gifts to each other. Even celebrities like Jimmy Fallon jumped in on the fun (see that video below).

Both Arbitrary Day and Reddit Secret Santa were created by RedditGifts, a user-run organization that was acquired by Reddit, Inc. last summer, after running independently since 2009. The organization, managed by husband-and-wife pair Dan McComas and Jessica Moreno, explained the meaning of the word “arbitrary” in an official blog post Tuesday:

“We left the name up to community members and the time honored tradition of upvoting. We like Arbitrary Day because it sounds familiar and like it might be real, yet you know it’s not quite right.”

Indeed, there’s nothing really arbitrary about it. The holiday is, as the blog post noted, “purely about giving a gift because you feel like giving.”

It’s a very purposeful day, and more than 6,000 have already signed up.