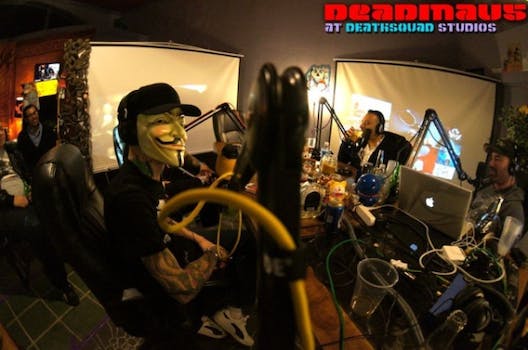 Anonymous gets a crush on Deadmau5

Deadmau5 is a product of Internet culture, but it took wearing a Guy Fawkes mask for him to win fans among Anonymous.

The Grammy-nominated electronica artist Deadmau5, known for his signature mouse costume head, seems to have a soft spot for Anonymous. And the feeling among his hacker fans is mutual.

The Guy Fawkes mask, first made popular by the anarchist hero of the movie V for Vendetta, is now the internationally recognized symbol of Anonymous, a loosely organized collective of activist hackers.

The tweets offer an unusual glimpse into the personalities of the Anons—members of Anonymous—behind the account, and how it operates.

As the Anonymous account with the highest number of followers on Twitter—now more than half a million—@YourAnonNews is the de facto mouthpiece of the amorphous hacker organization on the site. But it’s better known for its warnings about planned hacks and Anonymous news roundups than its owners’ pop-culture predilections.

The first tweet contained a photo of Deadmau5 wearing a Guy Fawkes mask behind a turntable in a production studio. The caption reads “So @deadmau5 rocks an #Anonymous / Guy Fawkes mask in recording studio? Respect! Anonymau5 FTW.”

The second tweet shared the same photo and commented, “Nice to see @deadmau5 in a Guy Fawkes mask finally!”

A follow-up tweet revealed that the account is run by several Deadmau5 fanboys who “got a little overexcited.”

Deadmau5 is no stranger to esoteric Internet culture. At yesterday’s Grammys, Deadmau5 teased—trolled, as Anons might say—dance artist Skrillex by appearing on the red carpet with a t-shirt showing Skrillex’s phone number and the caption “U mad bro?”

That phrase usually accompanies the rage-cartoon trollface on websites such as Reddit—signalling with a wink to Internet-obsessed fans that Deadmau5 is one of them.

No wonder the Anons have a crush.