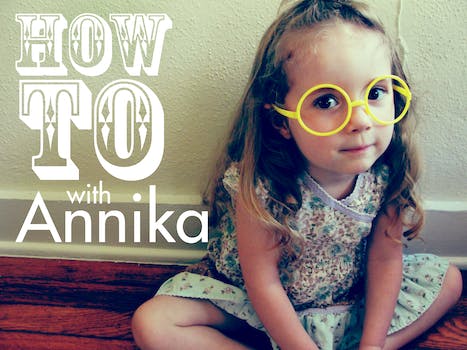 The cutest how-to instructor on the Internet

Annika doesn't just teach you how to pick up a chicken and ride a skateboard. She reminds you to celebrate life's small victories.

There’s a tutorial video on YouTube for almost any given subject, from coloring genuine crocodile back strips and shucking an ear of corn to spinning roving into yarn.

None of them, however, are nearly as cute or creative as those hosted by Annika, a born performer with natural on-camera charisma and unflappable curiosity.

She just happens to be 3 years old.

Her newly minted series, How-To with Annika, is like watching an audition tape for Ed McMahon’s StarSearch, folded into Bill Cosby’s Kids Say the Darndest Things, and with the family appeal of America’s Funniest Home Videos.

In the first installment, Annika doesn’t so much teach viewers how to pick up chickens as she does stumble behind them longingly with arms outstretched, looking like Elmer Fudd trying to sneak up on Bugs Bunny. It’s an adorable display of affection, one that despite the meager page views—253 at last count, and no, that’s not a YouTube bug—is easy to imagine becoming Internet famous.

“During the day, we’d let [the chickens] free-range in the yard and Annika would chase them around and try to cuddle them,” explained her mother, Britney, who requested her last name to be withheld over privacy concerns. “She would get so frustrated when they’d run away from her and take it personally!  She finally got good at it, though, and when I watched her explaining the process to her younger friends, it was adorable and I knew it’d be hilarious on film.”

The video series actually started as an extension of Britney’s blog, a series of personal journal entries chronicling the past few years of her family and her faith. A stay-at-home mother in Arkansas and an aspiring missionary, Britney writes candidly about her everyday trials and tribulations, from career changes to family vacations, often finding strength and purpose in specific Bible verses.

“The truth is that even if it ever feels like our life is standing still,” she wrote in one recent entry, “God’s work is moving forward all around us.”

“I wanted to pull away from using Facebook as my major connection with family and friends and really communicate the stories of our life on the blog instead,” Britney told the Daily Dot. “And I’ve wanted to be a writer my whole life, so the blog is my own little corner where I get to use a gift that God has given me to share about what he’s doing in our life and in my heart.”

Britney said she started the how-to series for Annika to “showcase her skills” and “to give her a fun way to feel proud of herself,” especially considering she doesn’t have younger siblings or classroom peers to impress just yet.

“I actually never know what to expect from Annika,” Britney furthered.

“Sometimes she can be incredibly shy and quiet, but sometimes she is the most entertaining thing in the world. She hardly even notices the camera because I’ve had it pointed at her nearly every day since she was born.”

In fact, the second video in series—an instructional guide on skateboarding—happened by chance one afternoon when Annika was playing outdoors. Britney thankfully had her camera ready.

Granted, Annika probably can’t ride a skateboard, at least not one that’s not positioned on grass. But that’s hardly the point. In more than two decades of skating, Tony Hawk has never thought of a trick quite like this one, which I’d like to call a backside swim paddle, though that’s selling it short.

More importantly, the video offers a rare and refreshing glimpse of childhood—easily distracted and connecting imaginary dots. (“I want to teach my hand to be a cricket … or a firefly,” she says in the second video, then attempts to do so.)

Britney promises more videos are in the works. Annika wants to instruct others on how to put away silverware, pick out your clothes, and ride the metro. (Here’s hoping she teaches me how to Dougie.)

Regardless, it’s not what Annika sets out to show us that matters. It’s what she teaches in doing so—to celebrate the small moments and minor victories that come only once in a lifetime.

“I love the way the videos show her childish enthusiasm in simple things,” Britney said.

“Grown-ups already know how things are done, so we forget how new and exciting all these small accomplishments are to a little kid. Annika won’t always be thrilled to show me that she can fold a washcloth or stack cans of tomato sauce, so I want to capture that excitement while I can.”