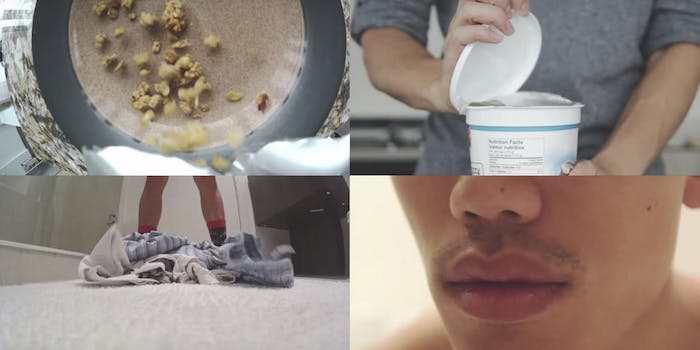 Andrew Huang performs an entire concert without picking up a single instrument.

The morning routine has a certain musicality to it, which YouTuber Andrew Huang captures perfectly in his new short film, “Get Ready.”

Huang turns the everyday noises he encounters while starting his day into a song without any words or real instruments. From the hiss of his shaving cream to the scratch of his toothbrush, these normal sounds come together in a surprisingly harmonic morning symphony.

Huang told the Daily Dot in an email that he doesn’t think he missed a beat with amy morning sounds.

“I think I only skipped some routines that are silent by nature— [like] meditation, stretches, [and] wondering where my keys are,” Huang wrote.

Huang’s project is part of the Never Before Seen series, sponsored by Sony, whose Action Cam can be seen in several shots mounted on objects like Huang’s razor or toothbrush. Huang said that the camera’s small size let him change up his style and experiment with angles he couldn’t normally use in his work.

“My natural tendency is to document what I’m doing very symmetrically, head-on, and with wider shots,” Huang wrote. “But I do like the perspective you get when you can actually attach a camera to different objects or your own body—it can make the viewing experience a lot more immersive.”

Huang has 244,000 subscribers on YouTube who are familiar with his unconventional musical ideas, like creating tunes out of wheels or out of the sound of him eating an apple. He wrote that he didn’t mind sharing his morning routine with the world because he doesn’t do anything too weird—at least in the mornings.

“A close-up of my unshaven face isn’t the most attractive sight,” he wrote, “but then as a viewer you get the satisfaction of seeing that all cleaned up in just a few seconds.”