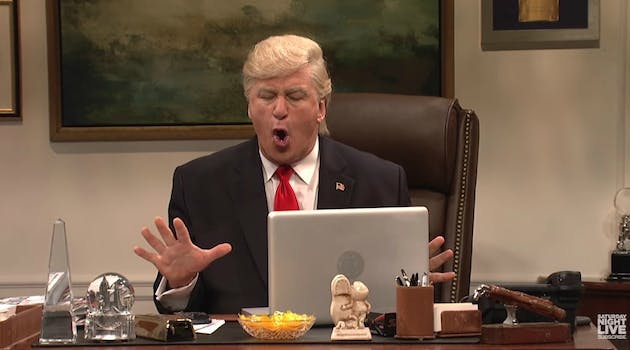 We can only hope to see Baldwin rock the stage.

Alec Baldwin is once again feuding with President-elect Donald Trump by generously offering his services for 2017’s 45th presidential inauguration. Through his Alec Baldwin Foundation Twitter, the comedian announced his high hopes to perform AC/DC’s “Highway to Hell” on Jan. 20.

I wanna perform at Trump's inauguration.
I wanna sing HIGHWAY TO HELLhttps://t.co/fCTArIajFb

Baldwin has never shied away from expressing his disdain toward Trump, constantly tweeting his criticisms and disapproval.

There is hope for Trump.
If he renounces every position he's taken and replaces all of his cabinet picks.
Easy. See?

With Bannon's appointment, Trump crosses over from disrespect for to abject hatred of ppl of color.

7- I know a growing # of ppl will join me in getting Trump out. 1 term. 1 horrible, corrupt, racist term. Then we get back to being America.

The 30 Rock star is known for his on-point Saturday Night Live Trump impersonation, pretty much nailing it from the haystack hair to the lingering pucker face.

In the past, Trump has also demonstrated his distaste for the actor and his impression, citing the show as “nothing funny at all.”

For Trump at least, it doesn’t get more A-list than this.