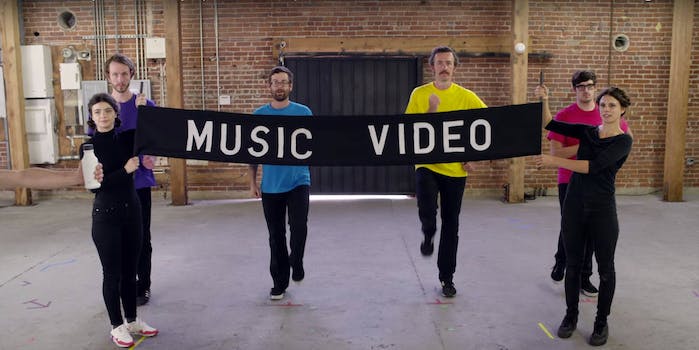 'It’s sad because now we kind of have to go on a weird defensive for OK Go.'

AJJ lead singer and guitarist Sean Bonnette understands that if you explain a joke, you run the risk of completely ruining it. That if you have to take the audience through your setup and dissect the punchline, you effectively take away the humor and gusto.

This is why Bonnette struggled to decide which part he would play when I called him the evening after his Phoenix punk band’s OK Go-inspired music video for “Goodbye, Oh Goodbye” went expectedly viral (though perhaps for the wrong reasons). Was he the Sean who progressively decided to change the band’s name from Andrew Jackson Jihad earlier this year, or would he answer my questions in character as the the self-congratulatory Sean who marched in place throughout the “greatest video ever made?”

Risking the integrity of the joke was what Bonnette and the rest of AJJ chose to do after facing a barrage of negative comments from OK Go fans within their video’s first few hours on the internet this week, and have continued to do for the days following. After having been on the defensive for the better part of that evening, choosing to be the former Sean appeared to a natural call for Bonnette to make.

“It’s sad because now we kind of have to go on a weird defensive for OK Go because those guys kind of took it the wrong way… I’d love to be able to do this interview in character right now, just be like, ‘Yeah man, [the director]’s a visionary, we kind of wanted to blow people’s minds, show them something they’ve never seen before!’” Bonnette tells the Daily Dot. “It’s funniest when as much of the joke is kept in the real world as possible.”

Directed by Joe Stakun, the video is a clear parody of OK Go, the web-worshipped band known for iconic, single-take videos with intricate choreography, camera tricks, and lavish sponsorships. However, AJJ and Stakun’s version is much less complex—while feeling just as righteous.

In their video, AJJ unceremoniously marches in place left and right in sync, a hat tip to OK Go’s first video “A Million Ways.” When Bonnette playfully pans the camera to the right to reveal some elaborate optical illusion like in OK Go’s “Writing on the Wall,” we see a frantic production assistant sitting on a tire and blowing up balloons. Stakun even makes a few appearances himself as he directs the band while rolling around on a hoverboard and smoking a vape pen.

Stakun, who has directed videos for Modest Mouse and Future Islands, tells the Daily Dot he had been toying with the idea of making an OK Go parody video for the last few years. Stakun says the point of the video was never to make fun of the other band, but to put the attention on the bumbling and incompetent characters AJJ and his crew portray as they metaphorically fall on their faces while trying to make a low-budget yet epic OK Go-esque video.

“It was really trying to take what they do and make it very dumb… Me as a director, I don’t normally wear suit jackets over T-shirts, or ride Segways, or direct with a vape pen,” Stakun says. “I didn’t want the video to come off as joke-y. I wanted people to believe we were dumb.”

At the end of the video the band and crew boastfully cheer and celebrate the single-take completion like in OK Go’s “This Too Shall Pass,” then show some behind-the-scenes footage explaining the six-month planning process, arduous challenges they faced, and their #brand partners.

“The philosophy that we kind of went into the video with was one of supreme self-importance where we’re completely blind to everyone else’s accomplishments, so much that in the universe [that we filmed] the video we’ve never even heard of OK Go,” Bonnette explains. “I’m a huge fan of their videos… They just cornered that [viral video] game so well.”

AJJ’s video tackled virality and then some, garnering nearly 137,000 views on YouTube in just over two days. Maybe too well, in fact, as a portion of the internet interpreted the video to be a diss toward OK Go. 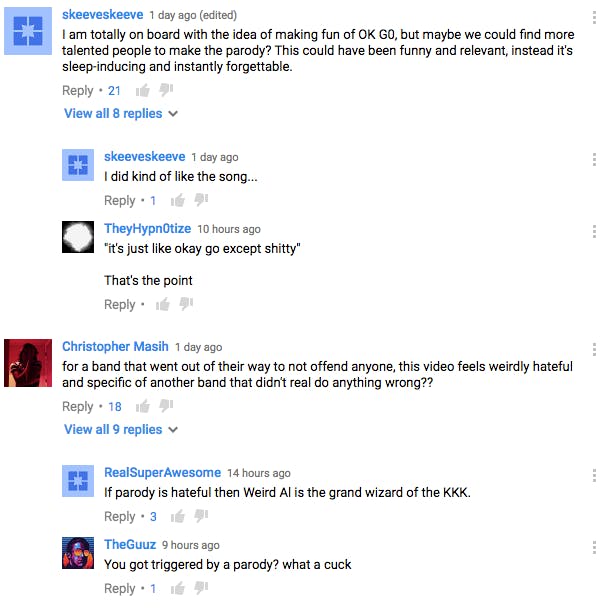 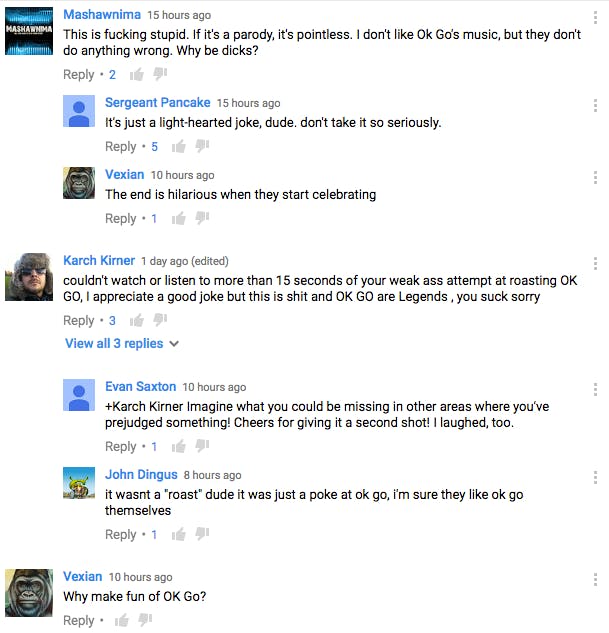 Within the first 12 hours of the video’s existence commenters suggested AJJ’s video was a petty attempt at a takedown of the other band—that AJJ was holding a mirror up to OK Go and implying that their videos are unimpressive and tiresome. Almost immediately, AJJ and Stakun denied these interpretations on Twitter.

A note from the visionary director of Goodbye Oh Goodbye… https://t.co/6bjYCMvQof

Again, we don't hate OK Go or want them to stop. Their videos are literally amazing, anyone can see that. The beef is all clickbait

The video’s rounds through Noisey and Gizmodo certainly fanned the flames. “No one is impressed by your dumb choreographed videos, OK Go,” the Gizmodo article reads. “You’re hurting yourselves and the people closest to you, and you need to stop.”

(While I spoke with Bonnette, the same article was amended with an author’s note: “The views expressed in this post are solely mine. AJJ are nice people who harbor no ill-will towards OK Go or anyone else as far as I am aware.”)

However, despite the internet’s earnest insistence, Stakun says that the last thing they want is for OK Go to stop, and says that the band’s strong voice and presence in the music video scene would make many directors feel amazed to direct for them.

“We do not dislike them,” Stakun emphasizes. “They are geniuses and there’s really no debating it with their track record and what they’ve made… I was like, ‘That’s not true [that we want them to stop making videos]!’ We’re obviously just a bunch of people having fun in a warehouse pretending to be OK Go with limited resources.”

Bonnette jokingly suggests the video may have been critiqued so harshly at the hands of the “Buzzfeed School of Journalism,” alluding to the trend of digital publications posting clicky, polarizing content in order to garner hits. Regardless, Bonnette says AJJ reached out to OK Go to make sure the latter knew their parody is simply sincere flattery.

“That’s just how that system works… I don’t want to shit on that either, the internet is where everything happens now,” Bonnette says. “I’m more pleased with the fact that [the video]’s getting so much attention than upset that I have to spoil the joke a little bit. It’s not the end of the world.”